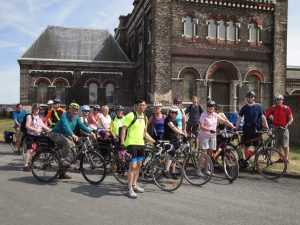 The Cathedral on the Marsh

RIDE CANCELLED DUE TO LACK OF RIDE LEADER.

The Crossness Pumping Station was built by Sir Joseph Bazalgette in 1865 as part of Victorian London’s urgently needed main sewerage system. It celebrates 150 years of cleansing London’s sewerage this year.

The Beam Engine House is a Grade 1 Listed Industrial Building constructed in the Romanesque style and features some of the most spectacular ornamental Victorian cast ironwork to be found today.

It also contains the four original pumping engines (although the cylinders were upgraded in 1901), which are possibly the largest remaining rotative beam engines in the world.

We have rejigged this ride in order to avoid riding out and back along the same route. The outbound ride takes us through Mottingham, Eltham and Welling. We pass the ruins of Lesness Abbey and then through Thamesmead on some lovely cycle paths. We will stop for a coffee and a slice of cake somewhere – possibly Avery Hill Park.

This route will bring us out at the River Thames a very short way from the pumping station. At the pumping station there is a £6 entry fee. There is a cafe in the basement where we could buy tea, a sandwich and some more cake! You could bring your own picnic if you like, though sitting outside might be a bit pongy.

We will stay at Crossness for about 1½ hours, there is plenty to see.

We will then cycle back to Bromley South along the Thames Path to the Cutty Sark (ice-cream) hopefully arriving 4.30 – 5.00 pm.

Distance is about 35 miles some gentle hills outbound but a flat ride home. This a leisurely day out so please don’t bring your lycra cos you won’t be needing it.