A bright sunny morning became a bright afternoon and then a clear cold evening. But not really cold in the cold sense of the word. 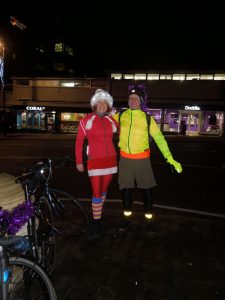 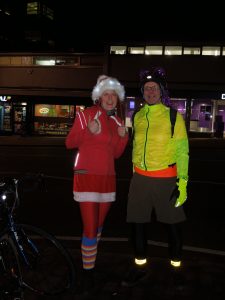 Half a dozen riders met at Bromley South; some had made little effort to pick up the festive theme but ride leader Tessa had excelled herself with a fabulous Father Christmas outfit which included a hat threaded with lights a fur lined skirt and red Father Christmas tights. Tessa’s bike was decked with lights and Christmas music played a merry accompaniment to our cycling. 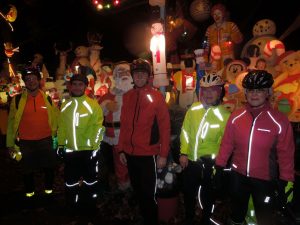 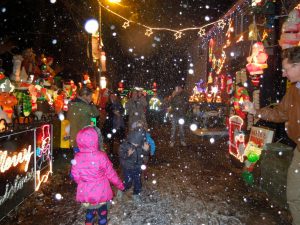 The first visit was to Downderry Road in Downham to see the beautiful Christmas display; our very own local Oxford Street. There was a machine blowing snow over an excited family as the owner tinkered with yet another set of lights he was adding to the display. I tremble to imagine what his winter electric bill is like. He does it for charity – Cystic Fibrosis. We left a donation and moved on! 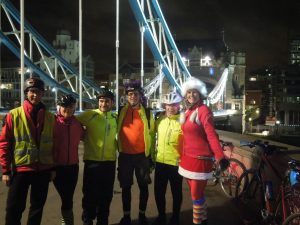 After about an hour the ride reached Tower Bridge with nothing more of note to report. Tower Bridge is a wonder on a rainy day in February; on a clear dry cold December evening it is incomparable. There was a stop for a quick photo-shoot and then onwards into the heart of the Capital. Leadenhall was deserted. Those city boys don’t do Sundays and particularly not Sunday evenings. 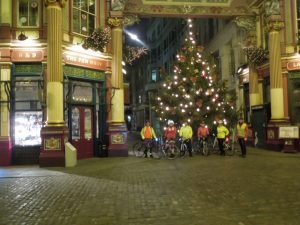 The ride wormed its way through the lanes and side streets almost devoid of traffic and with few people too. There is a narrow lane behind the John Soane Museum in Lincolns Inn Fields which I had never ventured down before.

Covent Garden blazed with lights a magnificent rearing reindeer formed a backdrop to a couple of pictures. Unfortunately it blinded everything else in the picture. There was team of Lego reindeer drawing Santa’s Sleigh and everywhere – people, just soaking up the festive atmosphere. 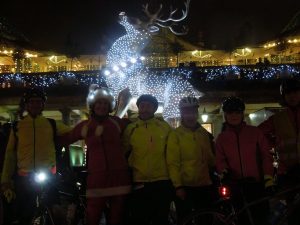 Through more back streets we found ourselves on Oxford Street battling our way through the junction with Tottenham Court Road. The traffic was stop strat and we equalled the progress made by cars and buses. Oxford Street, that wonder of British retail, that Mecca to the god of shopping was awash with people. Ant self respecting high street in any major town in the shires would have been pleased with such a turnout on a Saturday afternoon, let alone a Sunday evening. 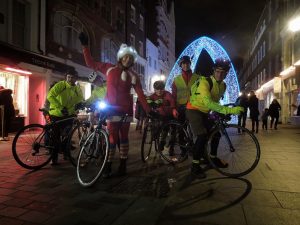 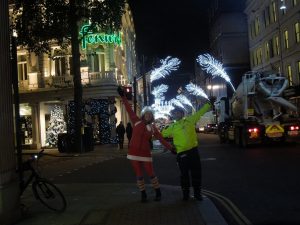 If the lights and decorations had up to now followed a rather predictable theme then Carnaby Street set itself out to break the mould and be different. Its hard to describe but I believe the pictures tell the story. 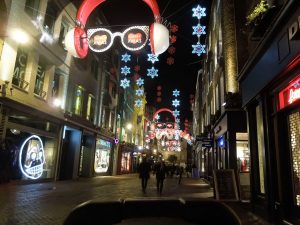 Through Picadilly Circus, we dodged more buses and heavy traffic and entered  Trafalgar Square. The Trafalgar Square Christmas tree was disappointing. I can’t remember whether it is always decorated with vertical stripes; but it doesn’t work for me. At the Western end of Whitehall we turned onto Westminster Bridge and made our way to the South Bank for a well earned glass of mulled wine or something warming.

One rider departed for the train so we were just 5 on the return journey. In Ladywell fields the police diverted us whilst there dogs combed the area for a burglar. The Waterlink Way seemed very busy for 10 o’clock on a Sunday evening but we were hindered no more and soon found ourselves back in leafy Bromley where we called our good-byes and headed to our prospective homes.

Our thanks go to Tessa for organising and leading such a lovely ride.