This will need to be a short report, which is a shame because it deserves a much longer write up. I will begin with my grateful thanks to the two members who designed and delivered this lovely route – Linda, who had the initial route idea and then Tracey who took Linda’s idea and helped her turn it into the lovely adventure we have enjoyed today. Thank you both it was a smasher! 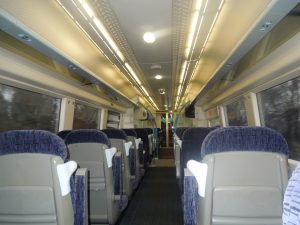 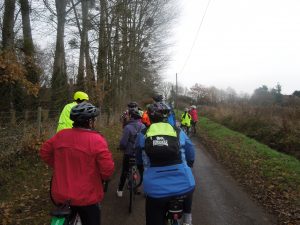 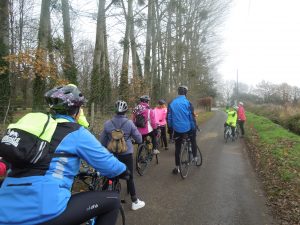 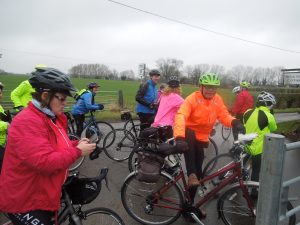 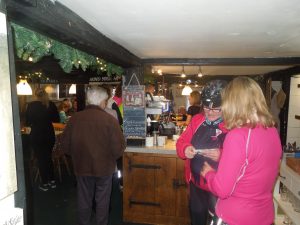 Twelve riders and the ride leader assembled at the Paddock Wood Station start point. For those of us who travelled by train it was a short journey and with the Supersaver Tickets cost just about £7.50 return. We had some of the usual suspects on the ride and couple of riders who we either haven’t seen before or haven’t seen for a long time. I mean Karen and Frankie. I believe that for both of them this would be their longest ever ride so that’s very special.

At Paddock Wood we spent a few minutes using the facilities which the station staff kindly unlocked so we could make ourselves comfortable. Once that was dealt with we were under way.

I don’t think I have ever been on a flatter ride. We criss-crossed the weald of Kent on the quietest of lanes. The weather was overcast giving us that lovely flat grey wintery feeling, it was warmer today than of late. There was occasionally a mizzle of the finest rain but we stayed dry. The roadside hedges had all been neatly cut and, denuded of foliage, stood almost like thick square-cut stone walls on our flanks. Without foliage of course it is possible to see easily through them which gives a wonderful feeling of wide expanse. The fields beyond the hedges were neatly ploughed and ready for, or perhaps even sown with, their winter crop. The earth felt sleepy. Occasionally we happened across some early Christmas decorations which added brightness to the flat grey of the day.

The morning ride was about 23 miles without a tea stop – because there wasn’t a tea room that was conveniently accessible so by the time we reached The Village Tea Room at Headcorn we were well and truly ready for some refreshments. Tracey and Linda had wisely thought to ring ahead so the staff were ready for us. We were not all able to sit at one table but we were made welcome and the food was good. This is a quirky little eatery, the fabric of the building clearly dates from a long ago era. Certainly 19th century and perhaps even earlier. The walls are covered in paintings and other works of art, which are for sale and dozens of clocks which aren’t.

The shorter afternoon ride returned us to Paddock Wood just in time for the 3.30 train to Orpington where it was still just light, and so to our homes.