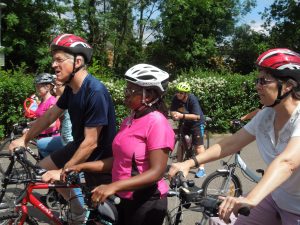 Adult Cyclists Course 2/16 finished last Saturday. The students who all started with little or no cycling experience have mostly completed their Bikeability Level 1 and are ready to make their appointments to take Level 2.

This has been a fantastic course and the students have worked hard both individually and collectively to achieve a very high standard and so as reward they joined their first Bromley Cyclists’ led ride to Lewisham via the Waterlink Way.

We met at The Old Village Café at Hayes. The place was buzzing with cyclists; mainly Bigfooters just back from their morning rides on the downs. The outdoor seating was mostly taken with riders telling tales of cycling bravura on the Dunwich Beach – so fresh in all our memories. There is a spirit of smug self-satisfied camaraderie amongst dynamoers. If you haven’t done it yet then I suggest that it’s something you add to your “to do before you die!” list!

Our more modest but just as important ride today was a 15 miler via the intricate alternative to Hayes Lane as far as Bromley South and then Queen Anne Ave to Shortlands where riders were astonished to realise they had made such progress so quickly on quieter roads.

At Shortlands we walked under the railway bridge because of the clogged motor traffic and then remounted in Ravensbourne Avenue and cycled to and through Beckenham Place Park where once again there was surprise at how easy this all seemed.

Next we joined the Waterlink Way at the back of Sainsbury’s Saver Centre. This is such an important piece of south east London Cycling infrastructure and a route that all cyclists need to know as soon as possible after taking up cycling. It is the safe route to anywhere and everywhere the cyclist wants to go.

At Catford some riders were not aware of the little tunnel under the South Circular at Catford Bridge Station, this spares cyclists mixing it amongst the traffic and soon leads them into Ladywell Fields. Here one turns north west for central London as we shall do on the Freecycle Feeder next weekend or by staying due north on the Waterlink Way alongside the Pool River one soon comes to the curly-worly bridge across the railway line and giving access to the café in the park.

The fare in café at Ladywell is much improved lately. The whole operation seems to have got its act together this year. So we enjoyed teas and ice-creams sitting in the afternoon warmth chatting.

It was gone 2 o’clock before we set off for the return journey. At the back of the Saver Centre as I was briefing one rider about to depart our ride for her home that it was at this exact location that she would meet Jane leading the Lewisham Feeder to the Freecycle when who do we bump into but Ann, Deb and Jane on a Breeze Ride outing from Croydon. If that’s not spooky I don’t know what is.

Other riders peeled away on the return so by the time we reached the Old Village Café we were just 7 from the original 11. The café was closed so we said our goodbyes until the next outing.

This was a lovely day out in the truest traditions of Bromley Cyclists. A lovely route and lovely people committed to enjoying their day out on a bike.

Here is a copy of the route in case you want to try it yourself.