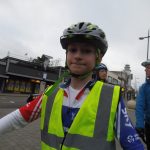 What a lovely sunny day, there might be a few people out this afternoon I thought as I cycled through Jubilee Park on my way to Bromley.  I always watch out for dogs off the lead here as they can often be rather hazardous.   Not today, all dogs were well behaved, it was the ferrett on the rather long lead that nearly got me.

Quite a crowd gathered at Bromley South, but by 2pm when we set off we numbered 22.  A slight change to the start of our route as we had such a large group and we decided to make our way up to Farnborough Park and Tugmutton Common via some of Bromley’s quieter back streets.

From here we cycled through Farnborough Village and picked up the cycle path alongside the A21, before setting off in the direction of Halstead.   A few then cycled up the rather steep Stonehouse Road to Halstead, while the majority ventured down the Old London Road and the rather more sedate Watercroft.   We all met again at the top before picking up Otford Lane which would take up all the way to the top of Old Polhill.

Unfortunately still somewhat covered in debris but still a pleasant ride downhill, through the tunnel at the bottom and out onto Filston Lane.   Quite an experience if you have never cycled down it, very steep, a rather dark tunnel and two hairpins, but everyone enjoyed it and made it to the bottom without incident.

The pace quickened a little now with only a few miles to go until we reached the tearooms at Shoreham where we were to stop for our tea and cake.   Here we met two other riders who had arrived late at Bromley South and missed us, so now we numbered 24.   We had a very pleasant half an hour or so chatting over tea and rather large slices of cake before heading off for Lullingstone Visitor Centre and making our way through the field to avoid the very busy main road.

Once out the other side we passed by Lullingstone Castle, the Roman Villa and rather than go straight up the hill to Crockenhill, we spent a little while admiring the ford and the river, no-one deciding to cycle through it today as it was in fact quite deep.   At that time we saw Donna Moosh and the Old Boy coming towards us, so stopped for a little chat with them.

Then it was back up the hill to the bridge over the motorway, before turning left and making our way to St. Mary Cray and the greenway.  From here it was back up Poverest Road, through Jubilee Park and on to Bromley South.

A lovely afternoon with good company.  Thank you John for leading and to Eve and Steve for assisting.