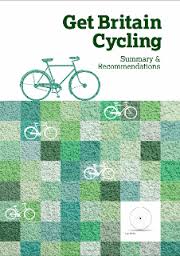 A landmark report on the future of cycling in Britain calls for a national cycling champion (similar to position occupied by Andrew Gilligan in London) to lead a drive for 10 per cent of all journeys in Britain to be by bike by 2025. More of the transport budget should be spent on supporting cycling, at an initial rate of at least £10 per person per year, increasing as cycling levels improve, says the report by British Parliamentarians.

The report of the influential All-Party Parliamentary Cycling Group (APPCG) inquiry ‘Get Britain Cycling’ also calls for 20mph speed limits to become standard in urban areas and lower speed limits on many rural roads. It also says that all children should be given the chance to learn the skills of road cycling, at primary and secondary school.

The group’s report, which was published on 24 Apr 2013 follows extensive public evidence from over 100 individuals and organisations, including the London Cycling Campaign.

It is both possible and necessary to expand the role of cycling in the nation’s transport and social life, says the group. This will lead to reduced congestion, environmental benefits and improved health.

For this to happen leadership is needed from the very top, the report concludes which calls on the Government to appoint a National Cycling Champion to advocate for cycling across all departments and externally.

An e-petition calling on the Government to implement the recommendations is here. Please sign the petition and ask your family and friends to sign it too.

Here are the key recommendations

You can read the Summary and Recommendations here