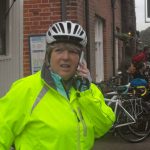 On Monday 9 Feb at the AGM of the Borough Group Spencer Harradine was re-electyed as Borough Coordinator and Eve Evans as the Group Secretary.

Paul hardy retired as Group Treasurer. Spencer asked that a record of thanks be recorded to Paul for his work in keeping the group’s monies in good order during his tenure of office.

Linda Rampling was then elected as the new Group Treasurer.

The remainder of the meeting was dedicated to more routine business details of which will be published in the minutes in due course.