The weather held good for a lovely spin out in the North Kent Lanes. We were eight at Bromley South. But Andrew led 12 of us from Otford Station on today’s little adventure. 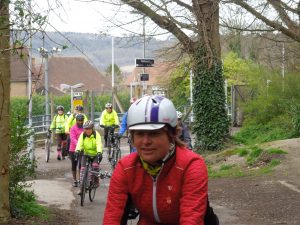 After the short nasty hill from the station up to Pilgrim’s way we were soon bowling along under a bright sun in a fairly stiff breeze. It was much cooler than of late. 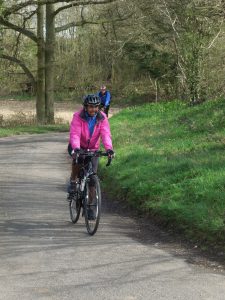 The Lanes of North Kent

We headed generally south east and passed Ightam Mote but did not pause. 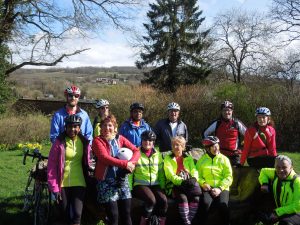 At Dunks Green we stopped outside the Kentish Rifleman 16th century pub for a quick pic and then it was off again. There were some smashing views across the Weald with the North Downs as a menacing back drop; a constant reminder that we were soon to confront the monster that is Vigo. 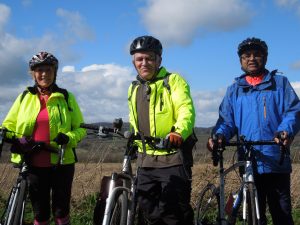 You know how you have that list of things you want to do before you die. Well when you are setting out to cycle up the beast that hides under the rather innocuous title ‘Vigo’ you need to be content that you have completed all those things. ‘Cos let me tell you on this linear nightmare you are going to experience DEATH!!

It begins at the Village called Trottiscliffe (pronounced Trossley – obviously). Now the gentle incline begins to steepen. Now is the time to hit the groove – head down, lowest gear (now you wish you had ridden your hybrid with a granny gear), slow very steady pedalling, pick a careful line of advance and just keep going. Try to ignore the odd decomposing cyclist in the gutter, past fatality from some long forgotten sportive, the crows tugging at the rancid entrails. Try not to think of the fire going on in your lungs and chest. If you are in the wrong gear – tough it’s too late now, there’s a choice – work or walk.

About ¾ of the way up you become aware of a bridge high above. Here Vigo is at her steepest and most merciless. You are now feeling sick. You realise the lump in your throat is in fact your lungs. And still the pain goes on.

And then it’s over the gradient loosens, you begin to quicken pace 2.2 mph, up a cog – 3 mph. Finally you burst onto the top road. You look for the brass band, where is the local mayor with his bag of medals, surely there will be a letter from the palace recognising your incredible feat. Nope nothing. A grotty looking pub advertising live music and that’s about it. Anti-climax is not the word. 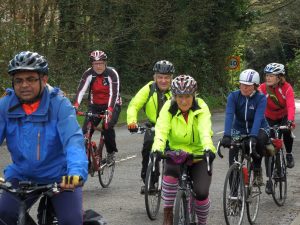 And so to Winterdale Shaw Cheese Factory. Here we were welcomed and allowed to buy as much of their stock as we could conveniently carry. 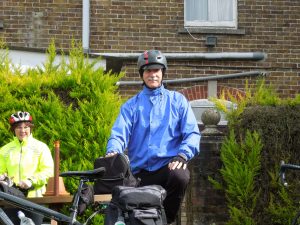 Your’s truly at The Black Horse

Three miles further and we arrived at the Blackhorse at Stansted where we enjoyed a very acceptable lunch. We sat inside, the temperature out-doors had dropped and there was a cold wind.

After lunch we continued our journey which once again allowed us the pleasure of the long downhill ride along Knatts Valley.

We got to Eynsford with 6 minutes to spare for the 16:14 to Bromley and the Shortlands Tavern for a debriefing before going home.

Thank you Andrew for a wonderful ride.