If you read through the previous ride reports or perhaps you are a regular reader anyway you will be left with the impression that all our rides are absolutely wonderful and you would not be very far wrong. But occasionally, just occasionally our rides don’t quite turn out as intended and I’m not going to beat about the bush this ride falls into that category. 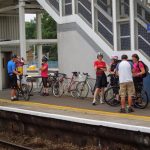 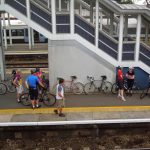 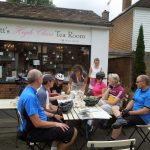 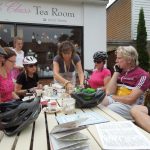 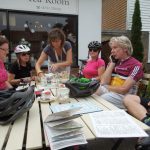 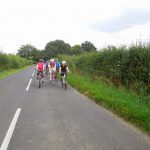 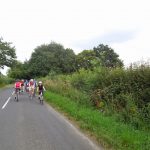 Much was caused by bad weather and it’s difficult to blame a ride leader for that. But some very dodgy navigation at the start of the ride is entirely the fault of the leader and I make no excuse whatsoever. Wrong tools, maybe. Poor planning, yes. Lack of concentration, definitely. The upshot of this was a very cumbersome false start which saw us several miles off course before we even managed to escape Ashford.

We muddled hither and thither as I sought to get us on the right route, this took over an hour and I have to extend my sincere thanks to the 8 riders who were with me who were very patient and who must have been thinking I had gone mad.

Anyway we eventually located NCN 18 (going in the right direction) and set off for Appledore on some nice quiet lanes, this was a blessing after some of the rather nasty roads whilst we were ‘lost’.

NCN 18 became Route 11 which was equally pleasant and at about a quarter to one we reached Appledore.

Wikipedia tells us that the name Appledore comes from the Old English apuldre (meaning apple tree) and is first recorded in the 10th century.Appledore was once a port on the estuary of the River Rother. The importance of Appledore as a port diminished suddenly in the 13th-century when great storms caused the river Rother to change its course; the village street now leads down to the Royal Military Canal. That’s enough history, if you want to know more then you can see the full wikipedia entry here.

Riders were thirsty by now so although this was not a scheduled stop when we spotted Miss Mollet’s High Class Tea Room it agreed that a nice restorative cuppa would be just the ticket.

Miss Mollet’s HC Tea Room serves their loose leaf tea in china tea pots and bone china cups. How posh is that. It was a special blend of tea too and I must say was most welcome and absolutely delicious!

Here we met the Kent Velo Girls who had just finished their tea stop and were departing on the next leg of their 80 mile outing. We sat outdoors in the sunshine unaware of the storm brewing just over the horizon.

We probably had about ¾ of an hour at Miss Mollet’s and were just preparing to leave when the sky darkened and as we set off the spots of rain began to fall. “Don’t worry, it’ll soon pass said Miss Mollet Cheerfully.”

Miss Mollett is an excellent tea-room proprietor but a rubbish weather forecaster. Within ½ an hour the rain was coming down in rods and we were wet through. Some of us had light weight shower proof tops, but no-one was equipped for this. We Struggled on to Brenzett where it was apparent that even if we made it to Ivychurch there was no way we could go and sit down in a pub and have lunch in the state we were in. The decision to abandon the ride was reluctantly made. We huddled under the shelter of a petrol station with a collection of motor-cyclists. Alice bought and shared some chocolate which was most welcome.

After a while the rain eased and we set off northwards; I was now using an Ordnance Survey with which I am slightly more competent (or perhaps that should read slightly less incompetent) instead of the list of directions generated by Google maps. The journey northwards in spite of the weather was really rather pleasant and we maintained quite a good pace, this is on the northern edge of Romney Marsh so pretty much dead flat at least as far as Hamstreet. We had a couple of punctures (fortunately simultaneously) and the delay got us cold again. Whilst we were fixing the puncture a couple of motor-cyclists passed us and one then slithered off her bike!. It was difficult to see what the cause was and I’m guessing just conditions. Anyway she (I believe it was a woman) was immediately up on her feet and her partner stopped to assist so we did not investigate further.

Ashford Station was delightfully warm when we arrived. We had a short wait for the train back to Orpington and were soon huddled in the warmth f the train. It wasn’t far up the line before we could see that everything was bone dry; the rain we had experienced was clearly very localised.

Anyway that brought to a close a rather disappointing day out. I will go and have another go at this ride because there is clearly a very nice bike ride to be had in this part of the world and I look forward to leading it in the future.