Well, what a good turn out.  Because of engineering works on the line we were forced to get the 8.10 from St. Mary Cray.  They appeared from all directions, some having left home at 6.40 to cycle to the station who were soaked through when they arrived, other fairly local people including the ride leader arriving by car and others driving directly to Ashford. 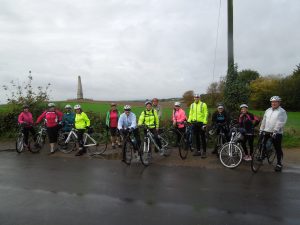 We set off from Ashford in very light rain, riding alongside the river on cycle paths and then cutting through some local roads and paths to avoid the busiest roads of Ashford.  It soon stopped raining, everyone was in good spirits and drying off as we sped along.  Heading towards Bilsington and then on to Newchurch where we had planned our morning coffee stop.  Unfortunately there was a church service at Newchurch Church so we carried on to New Romney where we found a delightful coffee shop for our first stop.  Yes it was noticed that some seemed to think it was lunch time as they tucked into a variety of refreshments. 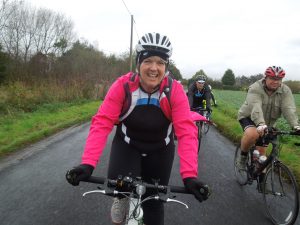 From here we headed for the coast and Greatstone, the wind by now was 18mph as we rode into the headwind around the coast to just before Dungeness and then on to Lydd, Camber and finally Rye.  This part of the ride was pretty exhausting and we hurried into the pub to order our lunch.   Unfortunately, although the food was good the service was slow and we left the pub at 2.45, but then Linda found she had a puncture and we didn’t actually get going on the last 27 miles until around 3.30. 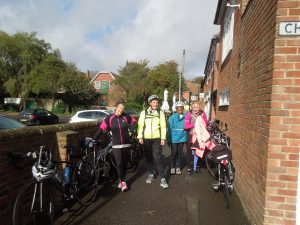 We made good time after lunch, the hilly section of the ride, riding west towards Wittersham before turning towards Tenterden, Woodchurch and finally back to Ashford.  We got back to Ashford before 6.pm and in daylight, which made the afternoon section pretty quick considering the hills.  A super day, well done to everyone who came and made the day a success. 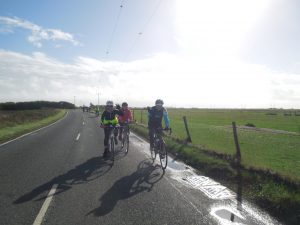 Those who drove went back to their cars while the rest of us, somewhat weary by now, grabbed a coffee and got back on our train, this time to Orpington.  Will do this ride again in the summer months next time. 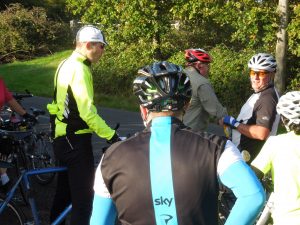 Av spd: 10.5 (which given the conditions we thought was pretty good.)