The ‘Cycle Smart, not Hard’ group

We started gathering just after 9.15 am on a cold Sunday morning. The weather app said 6 degrees, but it felt a lot colder than that. However, we weren’t worried as we knew what we had to achieve that day, and it would certainly keep us warm!

Just after 9.30 am Adam, our wonderful organiser, gave us the signal to start, and off we went. John, our ride leader at the front in a rather fetching combination of red and black co-ordinated attire, the rest of us trailing behind in brightly coloured jackets of yellow, orange, pink and blue. We certainly brightened up the morning with our high visibility clothing as we cycled sedately through the lanes around Bromley, all of us ready for the 35 miles ride that lay ahead of us.

At this point we would like to introduce our group. Adam the Organiser refers to the ‘slow adult ride’ on the B2B information sheets. We, the group (all 11 of us, excluding John) were not sure whether Adam was referring to our speed at cycling or the speed of our brains! Whichever it was, we decided to rename ourselves to the ‘Sloe Adult’ group. More suitable we felt. 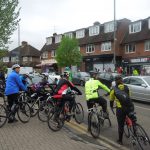 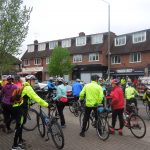 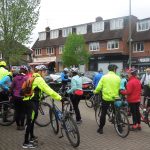 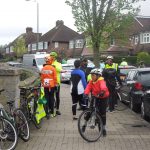 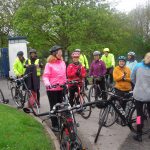 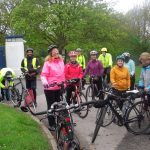 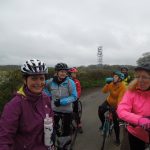 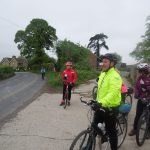 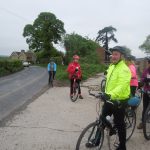 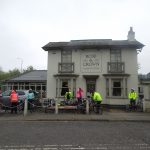 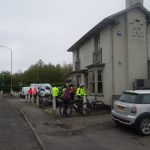 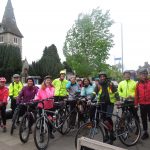 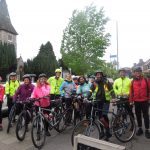 And so we pedalled. Smelling the air and admiring the beautiful spring flowers it was a delightful start. It soon became apparent though that something was wrong with our esteemed leader. While some of the group were enthusing about the density and vigour of the bluebells all he could see was grey foliage. It was a worrying few minutes until John suddenly remembered that he was wearing yellow glasses. What a relief. At least it was only temporary colour-blindness!

At the start of the ride, during the briefing, John offered us the choice of following some alternate routes. At our ages (about 75% of us were half a century or more) we decided to ‘cycle smart, not hard’ and take the routes that John outlined. This meant missing out a killer hill by cycling down Clarks Lane and Chestnut Avenue where we re-joined the route opposite the Sampan, and conquering Old Polhill, very steep with natural debris littering the route, but wonderfully traffic-free: the joy of cycling uphill without the roar of cars behind was liberating. The hill was definitely worth it.

Further on we descended into Brasted. We stopped to regroup on the pavement at the bottom of the hill, out of the way of traffic and people when suddenly a 4×4 roared across the traffic lights with an angry faced man yelling profanities at us. We were nowhere near him, but he was aggrieved at our existence and was very rude and insulting. Luckily there were no children around to hear the language he used. Perhaps if he spent less time driving round in a smelly old machine and more time out in the countryside he would not be so hateful. However, we put him out of our minds and prepared for the long, long climb that is Toys Hill. Climbing long hills must be one of the most boring things to do and we were all glad to reach the top where, for the dog-lovers in the group, there were a couple of dogs to talk to and have a cuddle with.

Cycling a bit further on we started to feel hungry. Luckily a pub was nearby, and John went inside to see if they would serve twelve grubby cyclists. We waited nervously. In recent years we have not always had the warmest of receptions from hostelries, so when John received an affirmative answer we breathed a sigh of relief, locked our bikes and took up residence inside. We were made to feel very welcome indeed, with our orders being dealt with in a very professional manner, and the food deemed to be delicious. For future reference the pub was The Rose & Crown at Dunton Green. Highly recommended with staff willing to go that extra mile to make you feel welcome.

The rest of the ride was for the most part uneventful. We had a slight incident with a slow-moving gate and a miserable gate keeper (another one who should get out more), but apart from that, we returned to the start place tired, exhilarated and with an enormous sense of achievement at having conquered our own personal Mount Everest (even if we did slightly cheat).

We are so looking forward to the ride on Sunday.

Our thanks go to John the Leader for keeping us safe and (mainly) on route, Graham (the yellow peril), our Lantern Rouge, and Adam the Organiser for cheerfully and efficiently organising the whole event. We take our hats off to you gentlemen.