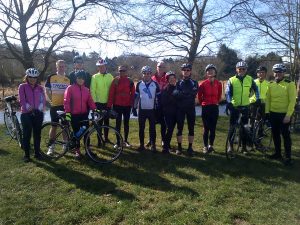 A glorious morning certainly dragged out the riders today with an outstanding 29 people in the 12 mph group. Joe and I agreed to split them 50/50 again and do a better job of the split than we did last week……so I took 15 and Joe took 14.

We then hit out first real hill in the shape of Worlds End Lane…….a nice little warm up for the rest of the route. We took a brief breather at the top for the group to ‘re-group’. After crossing the A224 Orpington by-pass it all went a bit wrong……well at least for my group!!

The basics of a ride leader role is to ensure you know the route and make sure you all get round safely. Well I failed on point 2 last week with the Alex v Range Rover boxing bout, so not to outdo myself I failed again this week on point 1.

I rode the route on Thursday to make sure all was good and ready and to portray this professional experienced ride leader duty. Unfortunately I knew better so took us all up Rock Hill. At the re-group at the top I had lost 6 riders. They had very sensibly followed a Garmin and turned right into Maypole Road. After 20 minutes I rode back to Worlds End Lane to find them…….but couldn’t!

It then clicked that 2015 is the year of mobile technology and if I made a telephone call to Geoff I would establish what had happened. They were right and I was wrong…….and this after me telling them they went wrong……….I can only apologise from the bottom of my heart for this small error. So I cycled back up Rock Hill (happy days…..not) to rejoin the 9.

Anyway, I agreed to meet the lost 6 at the Lullingstone Visitor Centre. After a further 20 minutes queuing for a cuppa we established that the 6 had gone straight past and were now in Eynsford. So we gave up queuing for a cuppa, hopped back onto our bikes and rode like the wind to Eynsford.

Hoorah, we were 15 again. Off we set to Crockenhill, turned left heading back to Chelsfield Village, back down to Green St Green then up Farnborough Hill for the last couple of miles back to Hayes. A much needed cup of Tea beckoned.

No punctures in my group but Joe had one in his, Polly I think.

Special thanks to Linda R for LR of Joes group and Geoff W and Karen W who shared the duty as LR of my group.

All in all another fantastic ride in glorious weather only spoilt by the incompetence of one of the ride leaders (and it wasn’t you Joe).

Sooner or later Adam and Big Foot will give me the sack?!

3 weeks until the next ride so keep practicing team and we will fly up Hogstrough Hill like a Harrison Ford piloted plane!

Just to prove we there were 15 at some stage!