Clearly the weather had a bearing on today’s attendance with only three 12mph group cyclists turning up today to take on Hogtrough and Christmas Tree Farm Hill climbs. So the usual problem of how to split the group was not an issue today. That however lead to a different set of decision making. Do we consolidate the 10 and 12 mph groups into one or do we bat on as a small but perfectly formed 12mph group. We decided on the latter. 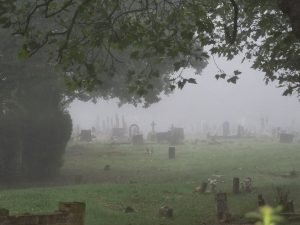 So Joe took one and I took two……..only joking! We set off at 10:15 heading off towards the Fox at Keston. By then we were already pretty damp with the fine drizzle doing its best to penetrate my somewhat showerproof(ish) top!

Not a lot happened really until we hit ‘The Hill’. A word on Titsey Hill. They really do need to look at that road surface. The vibration experienced when descending is unbelievable and will shake everything off your bike if it’s not bolted down or cable tied on. We all made it safely to the bottom though and took the left turn into Pilgrams Lane…….starting the approach to bottom of ‘The Hill’.

Always a good idea to check and recheck you’re in the right gear for the start of Hogtrough as trying to sort it out on the ascent is a definite no no. Out of the five, four of us made it to the top, so great effort team.

We agreed to regroup at the top and after a ten minute wait, I cycled back down to see what had happened to Caroline. Unfortunately she had a bit of a mechanical courtesy of a slight off when trying to disembark, removing the leg before the cleat. Anyway, chain put back on, gears checked and all fixed as she recommenced the journey and got to the top…..so well done to Caroline.

The wind was now getting up and it became increasingly harder to get up even the slightest gradients and it started to take its toll on one of our group. So at Fairtrough Joe kindly agreed to take Caroline on a more direct route and point her in the direction of Bromley South St. Bearing in mind Caroline had cycled from Dulwich she did fantastically well given the conditions thrown at us today.

This left Vinod, Alan and myself to bat on back to Hayes. Only one small obstacle left in our path, that being the climb up to Christmas Tree Farm. We negotiated that pretty well, regrouped outside Mr Lafarge’s favourite pub in Downe Village and then upped the ante down Jackass.

The wind on the approach back towards Coney Hall was a real problem alternating between a head wind and a cross wind…..maximum concentration required along here.

We caught up the Youth Hot Squad near The Warren (albeit they had done 50 miles by then) and rode with them back to the Hayes Village Cafe for a much needed Mug of Tea and Toasted Hot Cross Bun. We arrive back at 13:45.

We managed a reasonable 12.1mph average and 2000kcal burn. No punctures today, which is always nice but plenty of fluid and energy bar stops at the top the hills. 31.1 miles completed in less than ideal weather. A few more riders would have been nice, but bearing in mind the clock change and the weather we consoled ourselves with our three guests.

So well done to Caroline, Vinod, Alan, Joe and of course me as I managed to get the group around without taking a wrong turning or losing a rider under the front of a slow moving car!

I can’t make the next ride on the 19th April as it clashes with a Rugby Festival I have to attend so best of luck to all the group and I hope Adam makes a better job of sorting the weather!!

Hope to see loads of you on the actual Brighton ride