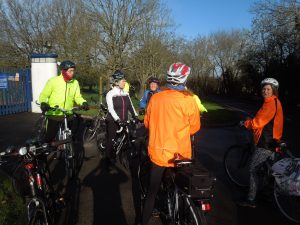 A Breather at the Met Police Dog School

Apparently there were 139 riders out today, it may well be that I saw most of them. The roads were choc-a-block with cyclists. It was certainly a lovely day for a bike ride, particularly considering it occurred in the window between the wild battering from Storm Henry yesterday evening and Storm Imogen currently lurking off our shores ready to smash us up tonight.

Joe and I split the 10 mph group in roughly half, I took 11 riders. Joe’s group went first and I set off a short time later. By the time my ride completed the circuit Joe’s group were just finishing their teas and coffees having been back for some while.

Our ride today was not without event. The first occurrence was only about 3 minutes in when there came a gunshot type explosion from the midst of the group and we discovered that a rider had suffered a blowout. Examination of the tyre revealed that the beading had perished and failed allowing the inner tube to burst through the tyre wall. The rider left the ride to return to the start and see if she could get a replacement tyre from Panagua and possibly join a later ride.

We were pedalling into a strong headwind but it was sunny and quite mild. On reaching the top of Foxhill it was clear a rider was struggling and Mark who had kindly offered to act as Lantern Rouge volunteered to escort our friend on a ride more suited to his abilities. I am sure that under Mark’s watchful supervision he will soon have the skills to re-join our programme and hopefully come to Brighton with us on the big day.

I haven’t been out in the lanes before today this year so it was great to reacquaint myself with some of the familiar landmarks under the pleasant winter sunshine. In the bushes we could hear the birds chirping their valentine’s calls in the search for a partner. The hedgerows, denuded of foliage revealed the detritus and rubbish carelessly discarded by reckless humanity as we seek to destroy our planet; appalling really. I see that Sticky, leading one of the faster rides, was even more affected than we were.

In Nash Lane the first of the Hot Squads chased us down and overhauled us. The youngsters all looked revoltingly fit.

In Skid Hill Lane we encountered a couple of impatient louts in long wheelbase vehicles who insisted on close passing which resulted in a rider losing her balance and getting a soaking in a large puddle. But apart from this we trundled on enjoying the scenery.

I had riders with me this year who kept up well but who had really struggled on the same ride last year. One commented that despite eating like horse she had lost 1½ stones since getting back into cycling – so all you weightwatchers if that isn’t encouragement I sure don’t know what is.

The route through the Forestdale Housing Estate is rather peculiar; it seems to hug one side of the valley constantly going up a bit then dipping down to the valley floor before going up again until finally it takes us over the ridge and we descend towards tram stop at Addington and then the mad-mile and home.

This was a wonderful ride, again I was blessed with a happy, friendly and committed group of riders who were a pleasure to lead and I do hope to see you all again in a few weeks’ time ready for ride 2.