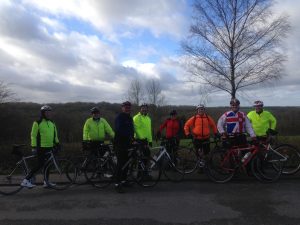 Well our nice gentle 15 miler, to open this year’s training schedule turned
into a rather challenging 22 miler, courtesy of Adam S. For whatever reason
Adam thought my Group would think 15 miles wasn’t enough so added a few
hills and 7 miles!! I must remember to thank him before the next ride!

We definitely got lucky with the weather, as Saturday was rather gloomy and
very windy. Saturday night was equally as unwelcoming. So when I drew back
the curtains Sunday morning and saw sunshine I immediately reached for the
sun cream and my Oakleys.

Arriving nice and early at Panagua Saif and I eventually decided we had 15
in the group. A nice number that didn’t quite warrant two groups. We set off
at 09:32 and made out way up to Keston Mark. The first regroup point. At
this stage we lost one of the group who decided to wait for the 10 – 12 mph
group.

We lost another en route to who decided to break off completely.

At the top of Beddlestead Lane, a further three decided that they too would
wait for the 10 – 12 mph group. So we became a small but perfectly formed
nine.

Beddlestead Lane was a lottery with the group having to avoid smashed TV’s,
smashed PC monitors, a Fridge/Freezer and at least 100 pots of paint. All of
the litter clearly having been thrown from a passing van instead of being
taken to the public tip. The only positive was that a lot of the rubbish had
been moved to the verges from where it lay Saturday.

The rest of the ride was pretty uneventful with the group bonding well and
staying together. The only issue being my slight deviation down a dead end
whilst negotiating the housing estate at Addington. All this to the great
amusement of a certain Mr John Wood. Anyway a great effort by all concerned
and thanks to Saif for performing the lantern rouge role.