Do you ever find yourself wondering about how the bike came to be invented? What was it that prompted a man (or woman) to experiment with a two wheeled vehicle as opposed to 3 or 4 wheels? I try to imagine what he (or she) must have been thinking that inspired a vehicle which at first view is so unstable. Having built the first bicycle and tried to ride it they would have fallen off; we all do the first time. So what made them persevere until they eventually got the hang of it and hit that eureka moment? Very puzzling!!

When I think of such things I then go on to ponder whether the inventor realised that the bicycle was such an amazing creation that it had the capacity to change the world, by being the most efficient forms of transport on the planet; that the bicycle would be such a force for good in the world. 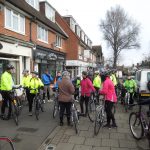 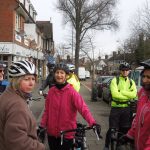 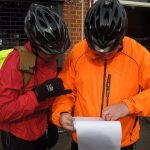 Today we have had another great day of cycling. Twenty miles through the lanes in the South East of the Borough, on a fine bright winter’s day. Basically the route took us to Downe, to Luxted, past the Sampan, Brasted Hill, Cudham, back to Downe and then to Hayes. There were numerous groups (as is normal) to cater for all capabilities:

Most definitely a ride for everyone. Fantastic.

Perhaps overall not quite as many riders were with us today as on the first event but still an excellent turnout and some very enthusiastic and capable participants. I am in no doubt at all that every rider on the 10 mph outing today is fully capable of cycling from Hayes to Brighton, and I hope they all will.

I was really pleased to see most of my riders from last time had returned to be in the 10 mph group. There were one or two new faces, and one or two who came with me last time decided that they would join a faster or slower ride group according to their ability. Once again there were a total of 23 riders for the 10 mph adult ride, but on this occasion Gary and Gary agreed to take half the group (in fact they got more than half) whilst Vinod and I took the remainder. 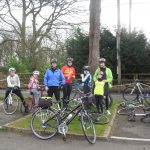 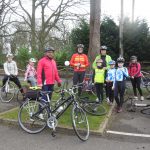 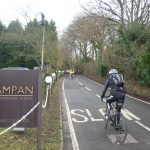 Vinod and I set off about 5 minutes after the two Garys and this seemed to work well as we did not catch them up until we found them having a coffee at Christmas Tree Farm where we kind of joined up, which meant we all got back to Hayes together which I thought was a nice touch.

I must say though, that there were so many cyclists on the roads in different groups I wasn’t really able to keep track of what was going on. I do remember that Adam’s group passed us and we overtook him on a number of occasions. At the Sampan we caught up with another group where they set of ahead of us, but we somehow overtook them before we got to Christmas Tree Hill where they passed us going up the hill. All most confusing.

I generally keep an eye out for flora and fauna on the rides. Today was no exception. There were snow-drops aplenty, I spotted crocuses, but most of all I spotted some daffodils; not in flower, but big fat buds which will be bursting out by next week-end or shortly thereafter. Summer is coming and we all love summer don’t we? ‘Cos summer means cycling! 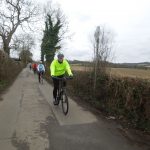 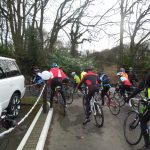 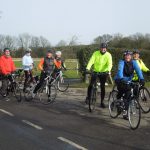 This was a lovely cycle ride and we got back to Hayes in time to beat the rain which poured later in the afternoon.