It was a cold grey day as planet earth rotated just a further few degrees towards tomorrow’s alignment when it will directly face our sun on the vernal equinox. At long last winter really will be behind us. Tomorrow the day and night will be in equilibrium and thereafter the days will grow longer than the nights. Next week-end British Summer Time starts and we will really begin to notice the longer evenings. Last week-end the snow-drops were abundant in the hedgerows, I did not see so many this week a further sign that the long warm days of summer really aren’t that far away. The sun’s warmth will begin to nurture growth and we shall see the countryside burst into that beautiful lush green which lasts just a few short days. 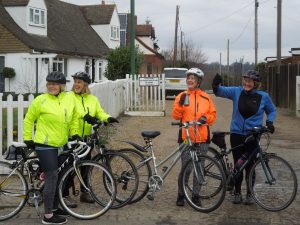 More pix at the bottom of the page

There were seventeen of us for the 10 mph group so Joe took eight and I had nine. My nine included Ann who kindly agreed to act as Lantern Rouge. As we waited to start I handed out flyers for the Sign for Cycling Campaign. This is the London Cycling Campaign Petition to get the Mayoral Candidates to commit to supporting cycling if they are elected in May. Please sign and send the link to your friends and get them to sign too.

Today my group gained two new riders; Jacqui had previously ridden with one of the other groups with her son and Deirdre, who has been looking around for a cycling group to join. Welcome to both of them and we hope you will come out with us again in the future.

We set off soon after 0930 and headed out to Barnett Wood Road where we encountered loads of folk making their way on foot to a rugby festival.

At Oakley Road we took our first deviation from the official route when we turned into Gravel Road and dropped down to cross the A21 and then cycle through the very pleasant surroundings of Farnborough Park. This rather usefully avoids the A232 Croydon Road which is a scary road for cyclists. There is 40 mph speed limit along this stretch of road which few seem to observe.

We cycled down through Farnborough Village a lovely long glide on a smooth surface to Green Street Green. But as we all know at the bottom of every hill is a valley and the start of an uphill. There are few better examples of this than Green Street Green where we turned into Worlds End Lane and commenced the long steep climb up to Chelsfield. The road twists and turns and gradually steepens to the summit where we paused for a breather and a photo-call.

Recovered, we soon pressed onwards passing the Five Bells and the Bo-Peep. We wondered about the name Bo Peep and it seems that the name derives from the name given to the area in the eighteenth century when it was renowned for its association with wool smuggling, particularly through a Cove at Hastings known as Bo Peep Bay. The pub dates back to the sixteenth century and was previously known as the White Hart. Right that’s enough history.

We passed the paint ball centre in Chelsfield Lane, I always think this is a very pretty road, it has high banks and passes through sweet-chestnut woodland. The leaf fall still lying visible amongst the trees and by the roadside is pale in colour and reflects the light and lends a very light airy feel to the landscape.

From here we dropped down under the A21 and M25 on the long hill to Shoreham. In the unlit tunnel under the motorway we encountered a large pile of builders rubbish lying on the carriageway. Fortunately we had been warned by oncoming cyclists, but taken unawares this would have been incredibly dangerous. I have reported this to Sevenoaks Council via Fix My Street. Hopefully they will deal with this urgently.

It was here we were overtaken by Sandra and the children. I don’t know how old they were but I would guess no more than ten. They were doing very well.

And so we arrived at the Lullingstone visitor centre for our tea/coffee stop. It was full of cyclists but the service was brisk and we were soon supping teas and eating cake. This is always a good time for the ride leader to natter to the other riders and I made full use the opportunity. We were pretty quick but I guess we still loitered for the best part of 45 minutes.

From here we took our second deviation from the official route to avoid the nasty main road that leads into Eynsford. There is a short section across the fields alongside the River Darent to Lullingstone Castle where you join the quieter route to Eynsford under the large brick viaduct. The road surface is a bit uneven but it’s very pretty. There was a herd of very attractive Longhorn cattle grazing on the far side of the river. The hedges had been neatly cut and shaped and, denuded of leaf, looked almost sculptured.

Crockenhill Road is not the steepest but it is long climb and we were glad to reach the bridge over the M25 and take a breather. The motor traffic roared relentlessly beneath us, and made us realise just how fortunate we are to be out on our bicycles rather than in cars.

In Skibbs Lane we found bags of what appeared to be asbestos dumped in the road as if thrown from the back of a moving vehicle. It has to be said that the amount of rubbish generally and fly tipping particularly is reaching near epidemic proportions in the lanes around this area. There must surely be some better way of dealing with the refuse problem than what we are doing at the moment. Looking through the haze on the far skyline we could see Central London, The Shard, the Gherkin and Canary Wharf were all easily identifiable along with several other high rises I wasn’t so familiar with.

And so we began the long descent back into Hayes, where we arrived at about 1345 hours.

I have led a lovely group of cyclists today who made the task of being the leader so easy. They have all ridden together for many miles now and I am sure some firm cycling friendships are beginning to blossom and this after all is one of the things that cycling is about. Cycling is not so much a means of transport as a way of life. How fortunate we are to live in the age of the bicycle.

Finally my thanks to Ann for being a committed Lantern Rouge which so took the pressure off me at the front. 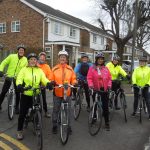 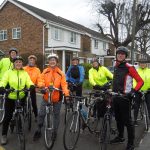 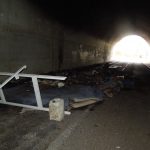 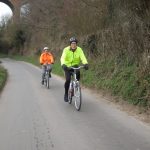 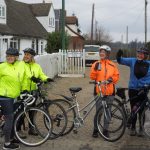 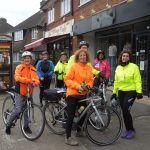