There were three adult training rides this week. I led the slower of these which started with 12 riders and we gained another on route. I will start by saying this was a lovely group of cyclists who were a pleasure to lead. As is usually the case there was variety of abilities, but everyone was properly committed and worked hard not only for themselves but for each other too. Surely this is one of the greatest joys of cycling.

I failed to file a report about last Sunday’s Training Ride. Unfortunately my time is at a premium at this time of year, and I simply did not have enough hours to complete one, so my apologies to my faithful followers (if there are any). 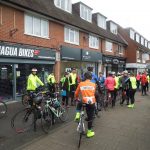 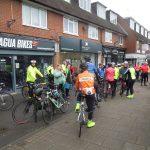 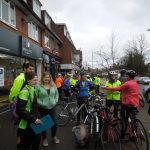 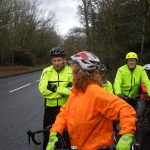 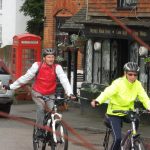 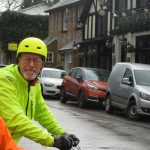 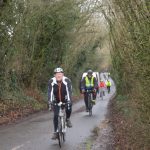 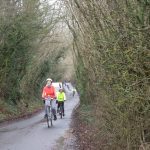 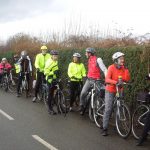 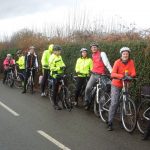 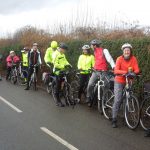 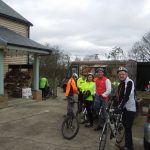 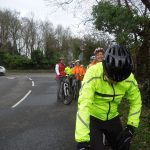 The weather was kind throughout, though it was a grey day which some might even describe as  ‘bleaky’. Rain threatened, indeed on a couple of occasions the dull grey became diluted with a fine mizzle, but on other occasions it was almost as if the sun would show its face, once it actually did, for a few short moments.

As I mentioned above we picked up an extra rider on our route, and at the Spinning Wheel I invited a couple of other ‘vagrant cyclists’ to join but they were on their own outing and were enjoying their own adventure.

On my commute to work through urban London I have seen crocuses, snowdrops and even daffodils but today for the first time we saw the same flora in the hedgerows of the rural landscape. Spring really is coming and then the long luxurious days of summer when we will really be able to get some cycling miles in. The daffodils were few but I’m sure that by the next time we ride they will be in abundance.

The reward for the hard slog up Cudham Road to Christmas Tree Farm was a coffee stop at Holwood Farm. Cudham Road is a bitter hill, narrow with passing places where motors seem very unforgiving and happily squeeze past through the narrowest of gaps.

We were amazed to find the Holwood café had been extended onto a mezzanine floor above the shop part of the outlet. On our arrival we found Rob Campbell and his group were also in the cafe so it was jam packed with cyclists which I think unsettled the staff who suggested that they would have appreciated a phone call to warn of the impending deluge.

Today we managed an average speed of 9.5 mph: for an uphill ride this was very pleasing and gives me no doubt that all my riders will be ready for the Brighton challenge that lies ahead. I look forward to leading them all again and I do hope that in the weeks between now and the next training ride on 12 March all will have an opportunity to put a few more miles on their clocks in their own time.