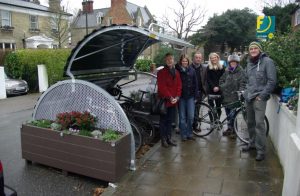 Bromley is celebrating the installation of its first cycle hangar in Tudor Road, Anerley.  Cycle Hangars are secure on-street communal cycle lockers in which local residents can rent a space to keep their bicycles.  The hangar takes up less than one car-parking space but stores up to six bikes. Tudor Road is in a conservation area near the Crystal Palace triangle

To celebrate being Bromley’s first hangar and in recognition of the special community spirit in Crystal Palace, a competition was run to name the hangar after a local hero.  After much deliberation, the chosen name for the hangar is ‘McKenzie’ after Don McKenzie, a local retired man who “has tirelessly driven community projects.….”

Alex Baines-Buffery, keen cyclist and owner of cycling holiday business Wine Rides, first made the request for the cycle hangar in Tudor Road after dragging his bike noisily up three flights of stairs to store in his flat became troublesome for both himself and his neighbours. After asking round fellow residents of Tudor Road, it became apparent that there were other bike-users who wanted to be able to store their bicycles outside of their homes. Bromley council undertook formal consultation with residents and the response was overwhelmingly positive.

Alex said “I am really grateful to everyone who has helped make installation of this cycle storage a reality. It will make life more pleasant for everyone who uses it, and I have already been asked by others how to go about getting one where they live.”

Bromley Cyclists Borough Coordinator Spencer Harradine in thanking Caroline Dubarbier, the lead council officer for the project, commented “This is very positive and sends a clear message that the council are prepared to support cycling where they are able, even if it means dealing with issues such as conservation areas.”