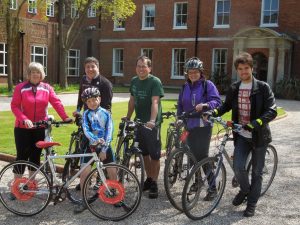 s history and its connections with the arts, professions and social sciences, met in front of Bromley Palace on Saturday afternoon.   We had assembled for a gentle 12 miles cultural tour of some the blue plaques denoting Bromley’s famous residents and historical sites.  Following our ride leader, Spencer, we left the tranquil setting of Bromley Palace.

Bromley Palace was formally the residence of the Bishops of Rochester from the 12th century to 1845.  Within its beautiful grounds is located Bromley Civic Centre.

Crossing the Kentish Way we made our way through the centre of Bromley, to Church Street, looking for the first of our plaques at 20 Church Street.  This was the former home of Alexander Muirhead, the electrical engineer who founded Messrs Muirhead and Company in 1894.

We stood opposite the church outside number 20, all of us eager to spy the first plaque. Puzzled by the lack of a plaque, Michael then said, “Did you know that there are two Church Roads in the borough – Alexander Muirhead’s house is in the other Church Street in Shortlands.”  And these seemed an eminently sensible explanation. Laughing at the confusion and undeterred (Ahh, easy mistake to make.  We’ll let Bromley Council know and ask them to update their map etc.) we continued. (However we have subsequently learned that we were in the right place and the plaque is actually affixed to Primark opposite).

We went past Bromley County Court and along Tweedy Way where proudly mounted on the wall of a terraced house is a blue plaque commemorating the work of Rachel and Margaret McMillan, pioneers of nursery education.

Relishing the afternoon sunshine and the blossom lined streets we made our way towards Sundridge Park, stopping on the way in Crescent Road to see to the blue plaque in memory of Prince Peter Kropotkin, theorist of anarchism.  Breaking the rules of cycling some of us briefly removed our helmets and rode up on the pavement to commemorate Mr Kropotkin’s theory.

Headwear back on, we made a steady assent north east and then descended down to the Chislehurst caves.  At their entrance we found our next blue plaque commemorating the caves’ role as shelter to thousands of London’s citizens during the Blitz.   We were joined here by Albert and Andrew who were sensibly ensuring they were well hydrated for the steep climb out of Chislehurst.  Without hesitation the group paused to sample the tea, coffee, cakes and ice cream on offer. Whilst enjoying the refreshments and admiring Jack’s souvenirs some riders told tales of their previous visits into the caves, with one member recalling the fantastic concert he attended in the caves back in the 1960s.

Refuelled we began the steep climb up Old Hill destined for the grand home of our next former resident, noted house builder and initiator of British Summer Time, William Willett.  We were reliably informed that he had proposed British Summer time after walking through Petts Wood early one sunny morning, during the First World War, and noticing the residents were still asleep and not making the most of the daylight hours!

Our next plaque was close by in Bonchester Close, off the exclusive Camden Park Road. Descending slightly, past the daffodil bordered golf course, we entered the close to see the birth place of Sir Malcolm Campbell (1885-1948).  In his lifetime he was famous for holding 11 world land and water speed records.   Several of his record breaking vehicles he named ‘Blue Bird’.   His son Donald, following in his footsteps, was sadly killed in his ‘Blue Bird’ on Coniston water in January 1967.

From here we cycled around Chislehurst Common, accompanied by the bells of St. Nicholas’s Church ringing in celebration of a wedding, and headed north on the flat to a house tucked away at the top of Manor Place.  This was the former home of naval architect, Sir Victor Shepherd.

Having now covered 7 miles Spencer took us off the busy A208 for a bit of an off-road adventure in the woods with the challenge of avoiding the uneven sticky mud.  This was more challenging for those not equipped for cyclocross. Leaving the trees behind, we entered Petts Wood in search of our final plaques.   We found these to be both former homes of opera singers, Heddle Nash and Sir Geraint Evans.

Homeward bound we now headed towards Petts Wood Station with its pedestrian bridge over the railway.  Having dismounted to cross the railway Spencer told us that Bromley Council are trying to secure funding for a new dual pedestrian and Cycle Bridge.

We then took the cycle route through Jubilee County Park, past Bickley Manor into Bickley, where we then cycled part of a new proposed Bromley ‘Quiet Way’ route through Clarence Road, Bickley.

‘Quiet ways’ will be a network of radial and orbital cycle routes throughout London. These will link key destinations by following backstreet routes through parks, along waterways or tree-lined streets.

The aim of these routes is to lower barriers to cycling, targeting less confident cyclists who want to use low-traffic routes, whilst also providing for existing cyclists who want to travel at a gentler pace. The network will complement other cycling initiatives such as the Central London Cycling Grid, Cycle Superhighways and Mini-Hollands.

To develop the new, continuous cycle routes, new way finding, surface and junction improvements will be introduced and barriers, such as chicanes, will be removed.  The picture demonstrates Clarence Road could benefit from the removal of those large pot holes!

From here we had a steady climb up Rochester Avenue before ending back where we began in front of the beautiful palace.  We got off our bikes here to enjoy the sunshine, lake and spring flowers in the parkland.

Enriched with new found knowledge of notable past residents and historical sites and feeling pleased to have burnt off a few calories, I’ll certainly be back next Saturday for the next ride in the series.  Will a few more notable women feature next week? I look forward to finding out. 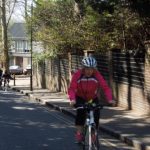 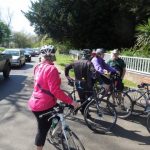 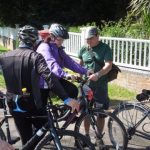 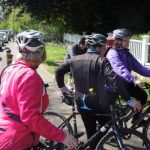 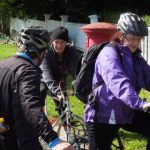 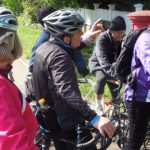 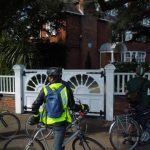 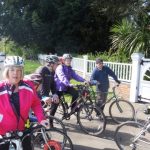 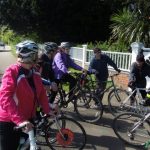 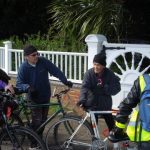 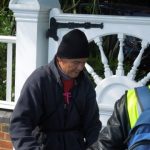 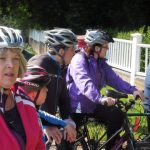 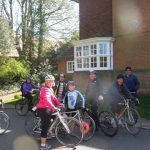 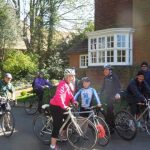 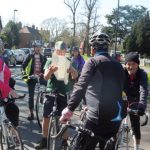 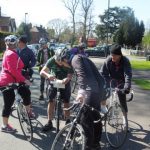 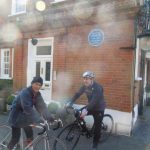 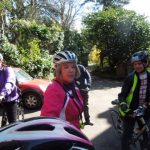 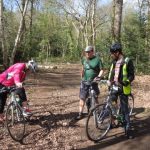 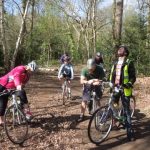 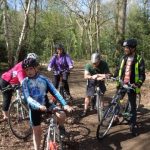 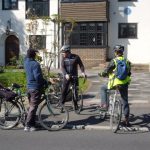 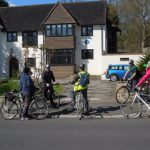 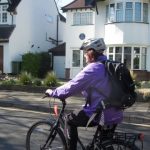 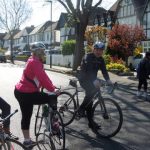 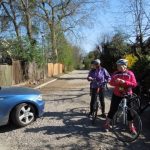 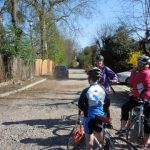