Blue Plaques on a Weekday 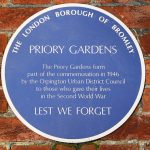 This was our first attempt at a weekday ride, although it is something we have been planning for quite a while. The ride was always going to be a bit challenging in the in absence of our regular ride leaders, John and Eve. Anyway Richard and Tracey thought they would give it a go and start with a blue plaque ride.

Five people had registered but on the day only four were available to join the ride around Richard’s carefully planned route to see some rarely visited blue plaques in and around Bromley, Keston and Orpington (with the odd grave yard thrown in for good measure).

The route followed quiet back roads and paths and a couple of bridle paths that helped cut out some nastier roads and junctions these were pastures new for Bromley Cyclists. It was a nice way to spend a Tuesday with good company and good weather for this time of year and something Bromley Cyclists will definitely do again. So keep an eye on the website for up-coming rides.