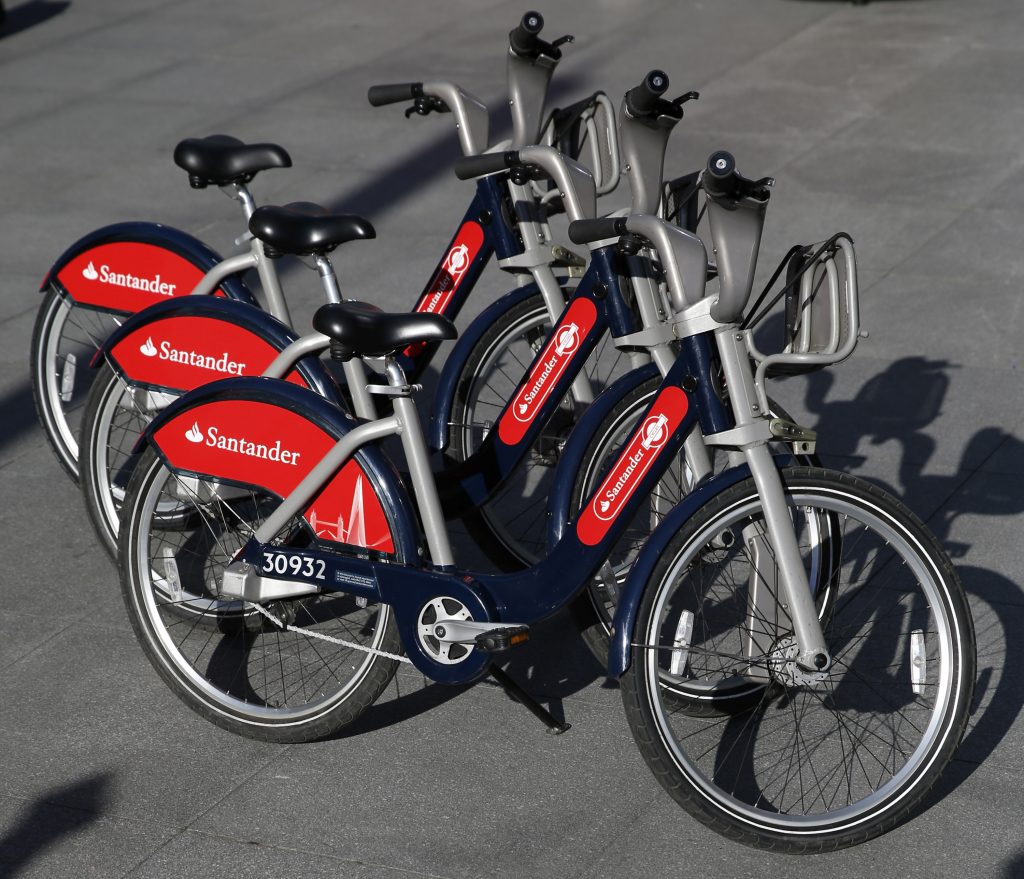 The Mayor of London, Transport for London (TfL) and Santander today announced a seven-year partnership to grow and develop London’s Cycle Hire scheme, embedding the scheme yet further into the hearts and minds of Londoners, visitors to the Capital and across the communities it connects.

The new £43.75m deal is the largest public-sector sponsorship in the world. But it will be far more than that, using Santander’s marketing expertise to give users a more accessible, rewarding and enjoyable experience.

The new name – Santander Cycles – and the new red-and-white livery of the 11,500 bikes, 748 docking stations and 32 service vehicles will become familiar sights to Londoners from April onwards. Staff uniforms and membership keys will also be rebranded.

Over the next year Londoners will see more Santander Cycles on the street, extra docking points and a revolutionary new Santander Cycles app, making it easier to access a bike than ever before. TfL and Santander will work together to engage new users via family-focused events in London parks, support throughout 50 of Santander’s central London branches and more active promotion of new developments for the scheme.

Mayor of London, Boris Johnson, said: `As everyone knows, London buses, phone kiosks and post boxes are red. In Santander Cycles, we have a new red icon symbolising the Capital to Londoners, and the world. Santander’s marketing expertise will help us take the Cycle Hire scheme to a new level, and I am thrilled to welcome them.

`With my Cycling Vision about to bear fruit in new Superhighways, Quietway cycle routes and better junctions, there will be more opportunities than ever for Santander Cycles. It couldn’t be a better time to get involved in cycling.’

Graeme Craig, TfL’s Director of Commercial Development, said: `We are really excited that our new partnership with Santander will help us build on the success of London’s iconic Cycle Hire scheme. It represents great value for customers, who will see improvements over the coming years including more bikes, more docking stations and new ways to access the cycles. Londoners and visitors to the Capital will see our iconic bikes change from blue to red over the next few months as they cycle around the city.’

Nathan Bostock, CEO of Santander UK, said: `The Santander Cycles scheme is a great example of our commitment to supporting the communities in which we operate across the UK. We are committed to making the experience of using Santander Cycles as simple, personal and fair as possible. It is why we will launch a world-first app to enable users to engage with the scheme from the palm of their hand; offer a more rewarding experience with cash back on every journey for customers of our 1|2|3 Credit Card; and why we will be looking to have Cycle Champions in all of Santander’s London branches to help users make the most of the scheme and their city.’

Santander will pay £6.25m a year in each of the seven years. In addition there will be a £1m per annum ‘activation fund’ to promote Santander Cycles and reach new customers through rewards, offers and incentives.

The scheme, the second-largest in the Western world, has seen almost 40 million journeys since its launch in 2010 and is a popular and affordable way to travel around London for work or leisure.

Usage of the scheme rose by a quarter last year and is at a record high, with more than 10 million journeys made in 2014. Customer satisfaction is also at an all-time high, with over 80 per cent of members intending to renew their membership