For me this ride started at 8.15 when I met up with Tessa, Jens, Shaun and Angela outside the Aladin Restaurant in Brick Lane; they had secured their bikes in the nearbySheffieldstands. For most others it started at Bromley South or even Petts wood.

The ride was not very punctual leaving Bromley South for what reason I am still unclear. At twenty five past seven the ride set off. There was a published pickup time of 7.30 pm at Catford Bridge. So we definitely were going to miss that. Sticky rode on ahead to Catford to see if anyone was waiting – there wasn’t.

In Brick Lane, when I went to check, the Sheffield stands were full so I locked up to a convenient lamppost. As I walked away I have to admit that I thought I would never see my beloved bike again. The improvement in the area in the 30 years since I lasted visited is almost beyond description. Tarmac has replaced the crumbling uneven cobbles. Broken dilapidated shop fronts have been superseded by neat tidy restaurants, shops, schools and clubs. The place is unrecognisable.  Brick lane itself was a seething mass of humanity; absolutely buzzing, but Brick Lane still enjoys the reputation of being the stolen bike capital of the UK.

By 8.30 restaurant staff were beginning to pester Tessa to take our table. A phone call to the Bromley South crew confirmed they were on Tower Bridge – so pretty close. The five of us piled into the restaurant to wait for them. We were shown a basement table set for fourteen. Popadoms were served and consumed. It was about a quarter past nine before Spencer, Eve and the others arrived. They had taken a wrong turning. We were 15 at table.

The waiter arrived and launched into a tongue twisting hyper-babble to explain that basically as far as the starter was concerned  we should accept his recommendation of a starter selection – so we did. We all ordered our preferred mains.

The Aladin restaurant does not sell alcoholic drinks, most people had brought a take-away but this was soon consumed and so an expedition was despatched to the local of licence to get some more. A case of fosters arrived. OMG.

I am pleased to report that despite the fact a large amount of alcohol was further consumed and notwithstanding that some had had several liveners before setting off, there was no drunkenness whatsoever; though some people disguised this quite well!!! Attempting to pour wine out of a bottle that still has its lid on Eve, is a mistake that anyone could make. 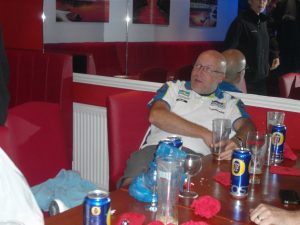 There was no drunkeness

The food was excellent, the company scintillating and the conversation noisy, excited and funny; our meals cost about £20 per head which was pretty good value. At about 11.30 pm we settled the bill and went to collect the bikes; all still there unbelievably. The return journey to Bromley set off. Now this should really have been a fairly straightforward affair. Get on bike. Pedal hard. Go indoors. Go to bed. Simples!

But this is Bromley Cyclists and everything just has to be complicated. By the time we got to the Rye pub in Peckham one or two folk were ready for a comfort stop. From the Rye came the sound of loud music – a live musician. The place was still going strong. It was suggested that we could ask to use their toilets; after all we are patrons are we not. Then someone no names, Eve, suggested that really it would be rude not to go in and just have a night-cap and perhaps a quick dance even. The time by now is 12.15 am. Not everyone was quite so enthusiastic, but never mind, in we went. 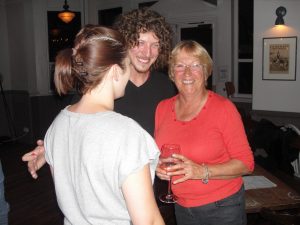 It was an hour later that we were amongst the last to leave as the place closed for the night.

The remainder of the return was unremarkable. I got to bed at 2 am. Others will have been even later.

Tessa you did not do the return run with us so you missed Peckham, which is a shame.