I will commence this report with an accolade to my 2 companions on this ride namely Toni and Stephanie from Pollards Hill Cyclists. The fact that they have left me alive is a tribute to their significant mercy rather than my route finding skills. Today’s was a long hard ride and I am in no doubt that I would not have completed it without Toni and Stephanie’s support; so many thanks to you two. I particularly mention Stephanie who did a cross country race yesterday so had heavy legs before we started. Well done!! 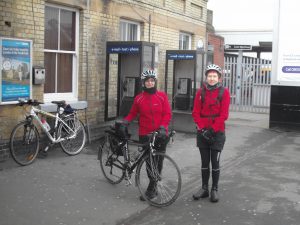 We few. We happy few!

Toni was awaiting my arrival at Orpington and within minutes we were joined by Stephanie. We waited in case anyone else would join us but it was not to be. Today’s ride was an explorer to Brogdale on the outskirts of Faversham via Maidstone, a distance, according to Google Maps, of 41 miles. In fairness to Google the original route it had plotted was via Northfleet which on paper is the more obvious course; I had changed it to the more southerly version to make a change from the usual route up to and through Gravesend on Cycle Route 1. Whether or not this is the reason for the ride being a slog I do not know – but hard work it was!!

We set off for Shoreham via Chelsfield and this seems to have been a bit of a mistake because we had to negotiate the Chelsfield Valley and very steep Well Hill which we could have easily skirted around by going more towards Polehill. We found ourselves entering Shoreham from a most unusual direction and we already felt we had been on a good cycle ride.

From Shoreham we took the Pilgrims Way which is a very pretty lane with the North Downs Ridge high on our left and the plains of the Weald of Kent and Kemsing to the right. In fact Google wanted to take us down onto the plain much earlier, but we ignored the instructions, stayed high and enjoyed the views.

On arrival at Wrotham we were ready for a comfort break, so we ditched our dignity and mixed with the bikers and truckers in the Oakdene Cafe at the bottom of Wrotham Hill. We didn’t stay long and were soon on our way again. We were now on the busy A20. traffic was fast and unforgiving. 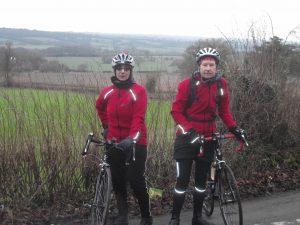 One of the reasons I had gone ahead with this ride today was the clear forecast that the snow would not arrive until tomorrow. It would be cold but dry had proclaimed Carol on the BBC, so we were somewhat disconcerted to find ourselves pedalling through flurries of light snow as we approached Maidstone. We noticed a rather nice looking fish and chip restaurant and realising that we had a decision to make about the weather we decided that at 12.30 it was a good time to stop and have some lunch. Papa’s was clean spacious and remarkably empty. We were shown to seats and were soon served warming cups of tea, fish and chips, scampi and prawns. Outdoors the snow continued to fall.

We lunched and nattered so it was about ¾ of an hour later when we got the maps out to check our route that we realised that the snow, for the time being had stopped. There was about a page of Google printout on the route through Maidstone and I could not relate it to the Ordnance Survey map I was carrying. So we set off hoping for the best. It was soon clear that there was a cycle route through Maidstone following alleys, paths and lanes; hence the rather confusing google instructions. On the ground it was fairly straightforward until we came out the other side of the city and here I overshot a turning which committed us to a long slog up to the A229 which was not really where we wanted to be. Realising my error it was relatively simple to re-plot my course along the Pilgrims way and rejoin the planned route at Hollingbourne.

Hollingbourne is the village at the bottom of Hollingbourne Hill; Hollingbourne Hill is another of these North Downs mega hills. At its base it is deceptive, gentle even but this escarpment gradually turns the screw on the unwary cyclist for at each twist and turn she shows you just a little more of her ever increasing gradient. Every time she reveals a little more of her tarmac it is just a bit steeper than the last section. We did well the girls and me. I guess the hill is about 1½ miles long and we had done well over a mile before Hollingbourne finally defeated us. One by one we were forced to dismount and walk. The snow by now had returned and where before it was melting on contact now it was beginning to settle. We were miles from civilisation. This did not look so good. 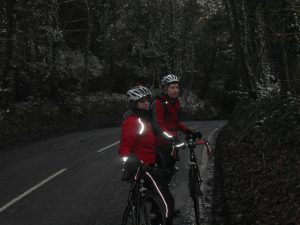 The snow began to settle

Eventually we conquered the beast and stood blowing and gasping on her summit. Snow swirled about us, the sky was low and grey. It was mid afternoon and already the light was failing. 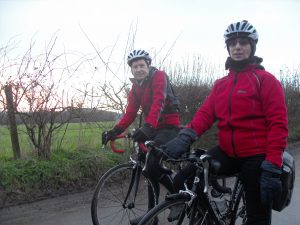 A pause in the long downhill ride!

Once again we set off, now with fear of deteriorating conditions lending wings to our tiring legs. Of course one of the joys of the long climb up Hollingbourne is the long ride back down the other side. The downhill just goes on and on and on, more of less all the way to Faversham. I got so carried away with the joy of the ride that I completely missed the Brogdale and turn and was almost into Faversham before I realised. The snow stopped and for a while a watery setting sun was visible in the west, but soon the light failed and we were cycling in decending evening light.

We did not have time to retrace our steps to Brogdale. We arrived at Faversham station with about 4 minutes to spare for the 16:34 to Victoria via Bromley South. We gratefully flopped into our seats and enjoyed the ride.

We agreed it had been a great day out on our bikes. It is a ride I would like to lead for Bromley Cyclists. But in all honesty this route will need some refining.

A lovely day out with great company.

Stephanie’s computer shows the distance as 46 miles. They were hard miles; but I for one enjoyed them!!