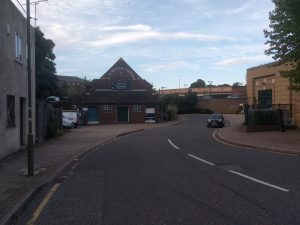 Bromley Cyclists are becoming increasingly concerned with the situation for cycling at Bromley South, especially on the stretch of Westmoreland Road between Hayes Road and the A21 Kentish Way. This already congested area of the town is where traffic on the A21 merges with traffic from Westmoreland Rd and Bromley Town Centre. It is extremely hostile for cyclists, particularly for any attempting to travel southwards towards Bromley Common. This is a major barrier to anyone considering cycle to rail, or cycle to school.

And it now seems the situation is going to deteriorate even further with several new projects either nearing completion or awaiting planning approval. We are of course thinking here of the 20 Storey St Mark’s Square skyscraper which finally appears to be nearing some sort of completion, a 17-storey apartment block on the site of the HG Wells Centre behind the police station, and the large scale project in Churchill Gardens. These developments will attract more people into this already crowded area placing further pressure on the roads and railways.

On 6 September, the Council will consider a planning application to build the “Shaw Futures Academy, a 10 storey ‘vertical school’ for c1400 pupils and staff, on the corner of Westmoreland Road and Masons Hill. Apparently there is a growing shortage of secondary school places in Bromley Borough, and for this reason the Council is very keen to approve the application.

However this project lacks a robust travel plan and this causes deep concern.  The problem is not the Academy itself but the combined impact of the various high-rise developments on congestion (and pollution), at a time of rapid population growth. Bromley Cyclists have written to the council during the consultation period raising these concerns, you can read our letter here. If you click here you can read the powerful submission made by TfL; a ‘Residents Action Group’ has been established and you can read their objections here. The way to ease the congestion is to facilitate a modal shift towards cycling, in line with the Mayor’s Transport Strategy, but this requires proper infrastructure, like segregated cycle lanes and early release traffic signals, that make it a safe form of travel.

Given the needs of cyclists and others, we have called on the Council to reject the SHaW plan until such time as Bromley has a transport strategy that eases congestion at the junction and, among other things, facilitates a modal shift towards cycling.  This planning decision offers us a once-in-a-generation opportunity to do something really positive for cycling at this awful location.  If the matter concerns you we suggest you attend the meeting of the Development Control Committee at the Civic Centre, at 7.30 pm on and make your objections known.

Since going to press we have been notified that the meeting of 6th September has been postponed. Once we have a confirmed date we will post it here.