Our Christmas Lights Rides have always proved popular, so this year to open the ride up to as many as possible, we decided to run it twice on consecutive Sundays. It is noteworthy that a private company offers an identical ride which is advertised on the internet at £26 per rider so perhaps our free offering needs to be reviewed!

Unfortunately due to bad weather the first ride had to be cancelled, with hindsight this proved a wise decision and I’m grateful to Tracey who spotted that conditions were deteriorating to the extent that the ride would have been unacceptably challenging if not dangerous. Accordingly we offered the opportunity to those who had missed the cancelled first ride to join us on the second, and one or two were able to adjust their diaries. We set off (and finished I hasten to add) as ten riders, which for a Central London evening / night-time ride is about right.

We gathered in Bromley under a grey sky and the first spots of drizzle. I checked my weather app on my phone which showed sunny and 5o or 6o. However more and more people were raising their brollies, and there was a definite feel of ‘set for the day’ to the weather.

Our riders had made a superb effort to bling their bikes. Most had added some tinsel but some had really made an effort and in the end it was impossible to separate Julie wearing a full Father Christmas suit, with a Christmas tree protruding from her saddle bag and Karen whose bike was barely visible through her tinsel and bell decorations. They were awarded joint first prize. 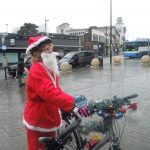 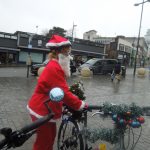 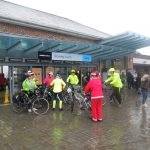 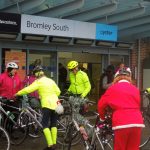 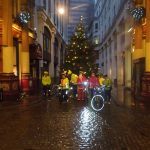 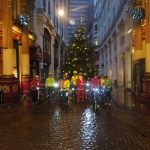 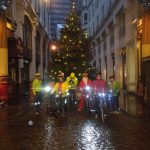 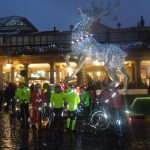 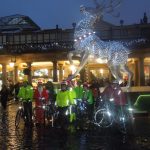 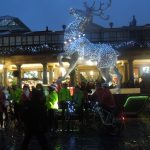 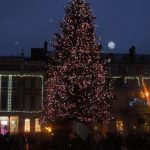 The ride to London was fairly uneventful but by the time we reached Tower Bridge the weather had penetrated through to the base layers and we were beginning to feel the chill. It was still quite early when we arrived at the ‘Machine’ coffee and bike emporium in Tower Bridge Road, however the premises were closing so we were directed to the nearby and rather rudely named ‘Fuckoffee’ café in Bermondsey street where we managed to cram ourselves in and enjoy a warming drink, huddled amongst other customers sheltering from the weather and working on their laptops.

Restarting, we wriggled our way around the back streets surrounding Guys Hospital and made our first visit of the ride into the rabbit warren known as Borough Market. This is probably the oldest of the London markets and can trace its existence to the 11th century. Along with Covent Garden market it supplied London with fresh produce and, being just a few hundred yards from the City of London at the northern end of London Bridge, was brilliantly sited to restock the greengrocers and other outlets in the Square Mile. Nowadays the market is a tourist attraction and sells craft and speciality produce to visitors who make the pilgrimage from all over the world. Nestling under the ribbons of railway lines coming out of Charing Cross, Blackfriars and Canon Street Stations it was packed with shoppers and we were forced to dismount and push our bikes amongst the crowded alleys. It felt very Christmassy.

Emerging from the market into quite heavy rain we crossed the River via London Bridge to the comparative tranquillity of Leadenhall Market where we admired their Christmas tree and grabbed a selfie.

The next point of interest was Covent Garden Market, this was also rammed with shoppers and visitors and we were again obliged to dismount. On one side of the square stood the impressive Covent Garden Christmas Tree bedecked with hundreds if not thousands of red and white fairy lights and on the other side is the rampant prancing reindeer also picked out in lights. Very impressive.

It was at last beginning to get dark now, it was also raining quite hard too and we were again beginning to feel the chill after the warmth of the coffee stop. A short discussion amongst the ride leaders resulted in a decision to cut the ride short by skipping the section down South Molton Street. From Covent Garden we made our way in horrible traffic to Oxford Street where we crept along in the line of queuing motor vehicles. The lights here were, as you would expect, pretty spectacular and as we turned into Regent Street they were even better. As the rain began to ease a bit we headed south in Carnaby Street which was also very colourful. And so we wriggled down to Piccadilly Circus and Trafalgar Square. Here we saw the tree generously donated by the people of Norway, who have made such a gift each year since the end of WW2 in recognition of the contribution of the UK in ending those hostilities. I have to say that whilst the tree itself is substantial and impressive, it is probably time that Westminster Council did an upgrade on the lights they use to adorn it. In comparison to the Covent Garden Tree the Trafalgar Square version looked rather sad and ordinary.

On the far side of the square we arrived at Charing Cross where we decided that on this occasion we would end the ride. Riders were cold, wet and ready for a bath and a warm up. So here we stood the ride down and caught trains heading towards Bromley.

There was one final treat for those travelling on the Hayes Service with Linda. Linda had made some of her wonderful ginger drops so they definitely warmed us up on the journey home.

A great ride with a lovely bunch of riders. Sorry to have got you so wet and cold. Hopefully you will all be able to thaw out by Christmas and will enjoy the festivities with gusto; eating as much pud as you wish and washing it down with copious lashings of wine, beer and spirits (within the limits of sobriety), in the certain knowledge that in the new year you will once again be out there turning over the pedals and working off those excess pounds / kilos.