Today I led six riders on the Christmas Lights route check. Six of us set off from Bromley South for our ride up to London which we all know like the back of our hands and then a circuit of some of the city’s most popular areas where the Xmas lights will hopefully be at their best this time next month. This will not be a ride for the faint hearted. 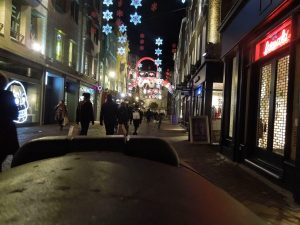 The first major event of the day was the two minutes silence to remember those who had given their lives in the first and second world wars and indeed many other conflicts since then. The 11 am alarm went off at Nunhead and we pulled over to mark our respect.

There is a new coffee shop called Crol & Co at Dunton Road opposite Willow Walk which I have been eager try since it opened a month or so ago. This seemed the perfect opportunity so we pulled in and piled in. There was no room to sit inside so we sat outside chatting. It was chilly but not cold. No sooner had we sat down when a gang of workmen with road drill started making a racket. Typical. Coffee and cake was pretty good.

I had added some new stuff to Tessa’s original route and I was keen to see if or how this would work. My first variation was a visit to Borough Market. This proved a bit fiddly and I will need convincing that the Christmas offering here will be worth the effort.

We next headed over the river to Leadenhall. We used the lovely segregated cycle lane over Blackfriars Bridge but I think I will need to look again at this and work out how to access Southwark Bridge which will knock a mile or so off the ride and should be a bit more direct. Tessa’s route takes us over Tower Bridge, which is very scenic but not the best for cyclists and I’m not sure when it reopens either.

From Leadenhall we made our way past St Paul’s to Covent Garden where we took our lunch break. It was a shortish break before the afternoon’s proceedings; perhaps the most challenging part of the ride Drury Lane to Tottenham Court, although Wellington Arch and Hyde Park Corner comes a close second.

We slithered and snaked our way past queues of stationary cars and joined Oxford Street at Tottenham Court Road, surely only a madman would consider bringing a car into central London. There is a huge amount of Crossrail redevelopment in progress here.

Oxford Street was remarkably clear and progress was good; we had to get off and push in Carnaby Street, and walk from Regents Street into Piccadilly. Knightsbridge and Brompton Road past Harrods were chaos.

We finally turned back southwards and recrossed the river on Vauxhall Bridge. At Waterloo some chose to take the train home. A couple of us cycled and got back to Beckenham at about 5.15 pm. This was a long ride and I will need to do some editing, I suspect that Tessa’s original route is about right.

If you wish to come on The Christmas Lights Ride on 18 December you need to register and places are filling up fast.

No Pics today folks I was a bit idle with camera.