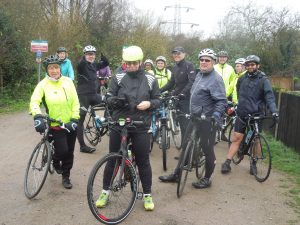 This was a great ride with great riders who looked after and helped each other and were a real pleasure to lead.

It was mizzling quite hard on the way to Bromley South. I had been out earlier when it had been mizzling even harder so it seemed to be an improving situation.

I arrived in plenty of time and there was just one rider waiting but I was soon joined by others. One person dropped by to wish us luck and tell us he didn’t like the look of the weather and he was heading home. Hmmm!

In spite of comments to the contrary on the Beeb it was cold. The forecast was for rain at first which would clear, but it would be mild. Well the rain did clear but it was not mild (or even semi mild). Just after 10 o’clock 7 of us set of for pick up point 2 – where we found exactly no-one. It was immediately clear that the roads were busy this morning, we had to force our way out of Norman Park – Christmas Shoppers I suppose, what wasted day when they could have been riding their bikes!

By the time we reached Orpington we had begun to warm up a bit; more importantly the mizzle had stopped and we saw no more of it for the rest of the ride. So that was a bonus.

Fifteen riders set out from Orpington with Eve leading as she knows some slippery little quiet ways which are always a pleasure and enable us to miss traffic on the bit towards the Cray Valley Greenway. On the Greenway there were throngs of walkers on the shared use paths. Well throngs is perhaps a slight exaggeration but there were certainly more than we usually see on a Sunday morning, though in fairness we were a bit later than we usually are.

Reaching Star Lane I stopped for long enough to give our usual warning about the state of the road and likelihood of encountering fly-tipped detritus strewn across and even completely blocking the carriageway, astonishingly the road was completely clear. Whether the fly-tippers have repented their wicked ways or Bromley Council have been diligent in clearing the dumped mess is unclear – but it was very welcome. There was no obvious activity around the Naturist Foundation. Most riders seemed to keep their eyes firmly fixed to the front, though I did note some sneaky glances towards the wooded glades to our right but perhaps this was just riders checking over their shoulders for traffic???

A brisk pace was set – partially to keep warm, but also to reach Rochester in plenty of time to enjoy the Christmas Market in the grounds of the castle and the other interesting attractions in this historic Dickensian North Kent Town.

The route was quite hilly, nothing savage but just lots of undulating ups and down. All was going quite well until we reached a long twisty downhill section just before Green Street Green when a rider hit mud on a downhill right hand bend and lost her wheels and hit her head on the road. First aid was given, and she was OK though her helmet was split. One of the team knocked on the door of a nearby farmhouse and acquired a bag of ice with which to soothe a largish bruise, another rider carefully wiped the casualty’s mascara around her eye so we thought that she had a black-eye coming up until another rider realised and wiped it off. The patient’s bike was fine, though needed a good clean up to clear mud encased mechanisms. This delayed us for a while, but in reality we were very fortunate this did not become an ambulance and hospital case.

There were various attempts to work out how an ice pack might be affixed to the bruise under the damaged helmet but after a couple of comical attempts we gave up and dispensed with the pack which another rider agreed to carry in her bicycle basket. Eventually with the rider made comfortable we pressed on towards the well-known and very popular cycling stop at the Promenade Café on the waterfront at Gravesend.

Then the second disaster of the day – the café was closed. Oh what a to-do. And indeed what were we to do? Cyclists deprived of tea; but then ever resourceful and reliable Evelyn produced her rabbit out of the hat – well actually her festive mince pies out of her saddle bag, and they were absolutely delicious. Thank you Evelyn.

We decided that with only about 10 miles left on the ride we should press on and get to Rochester and enjoy our refreshments there.

I have written about National Cycle Network Route 1 (NCN) here before; presumably the section to the east of Gravesend leading towards the Hoo Peninsula was one of the first established when the project was in its infancy in 1984. The route follows the narrowest of paths on cobbles and other uneven surfaces which are always flooded in wet weather. Wikipedia tells us that the NCN was intended to be suitable for a 12 year old to be able to ride unsupervised. I have never ridden this section of the NCN without mishap. Yesterday was no exception; two riders were thrown from their bikes by this poor quality cycling infrastructure. “Come on Sustrans, what was acceptable in 1984 has long been superseded by the expectations and vastly increased popularity of cycling 30 years later; this section of your route needs your urgent attention.”

Fortunately there were no injuries sustained here and we continued along the old railway line alongside the Thames Medway Canal, passing the Metropolitan Police Firing Range, and a variety of other shooting ranges. There was evidence of earthworks in the ditches but it appeared to be more to do with water management rather than improving conditions for 12 year olds on bikes.

The path emerges at Higham so we were now within shouting distance of our destination. At Wainscott we rejoined civilisation and located the path along the top of the cliff above the River Medway above the tunnel through which the A289 is routed.

At the bottom of the path leading from Parsonage Lane to the riverside path the Russian submarine gradually rotting in the river came into view. Its normal rust colour appeared to have been overwritten with a sort of slime green – its winter coat perhaps.

As we turned onto the Medway Bridge we could see an ambulance and police car blocking the road. There appeared to be two casualties lying on the edge of pedestrian crossing island. I thought one of them had a resuscitation gizmo in his mouth but it was across the other side of the road so I could have been mistaken, one rider thought it might be an exercise, but it looked to me like the real thing.

And so we arrived at Rochester High Street, the finish point of our ride. Some riders made their way straight to the station – more of this later; others went to visit the Christmas Market in the grounds of the Castle whilst most found their way to Tiny Tim’s Café where they enjoyed a cup of tea being especially careful not to damage the newly installed table with the hot teapot; the proprietors were most concerned about the table!

And it was at this point that a rider looking up the times for the return trains on the internet found that there was a replacement bus service to Meopham. I must say that this took me entirely by surprise as I had checked for return trains earlier in the week and found no mention of any problems.

We sat discussing the return route over a very relaxing cup of tea with a cake for some. The options seemed to be to ride to Meopham (about 9 miles away on roads we didn’t know), to return to Gravesend the way we had come or perhaps blag a ride on the replacement bus service.

Finishing tea we went to investigate the options at the stations. The first surprise was that the station was not where we last left it – how confusing? On entering the station it seemed deserted except for engineering staff, not just the usual array of manual staff but there were suits too. Enquiring at the counter it was confirmed that a bus service was replacing the train service until 1721 when the first train ever would depart the brand new, just about to open, station at the train would be going to Bromley South. This rather explained the fact that I not seen this when checking the trains – I had only checked for later trains which were all going to run normally. We had just wanted an earlier departure time than I expected.

We retired to the pub for an hour or so, and returned to the station in time to be the very first passengers onto a train from the new station. And so an eventful day came to a close. Happy and tired riders were carried in comfort towards their homes, a hot bath or shower and a hot dinner.

Finally to the team; you were all great riders, were good company, looked after and helped each other when the going got tough, and a pleasure to lead. Thank you for coming and I hope to see most of you on my Christmas Lights Ride next Sunday