Geoff was our leader for today’s ride. Six of us met at Bromley South at 10 am and, under heavy grey skies and the occasional spots of rain, we were soon on our way. Geoff led us through the back streets and cut-throughs of Shortlands and Beckenham before we eventually gained the end of the Waterlink Linear Park at Lower Sydenham. We passed Steve W’s secret shed of recycled bikes which he was proud to point out to us. The council are building him a gated access but progress seems slow. 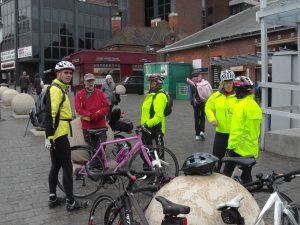 We pressed on along the Waterlink Way crossing the curly-wurly bridge at the back of Lewisham University Hospital. 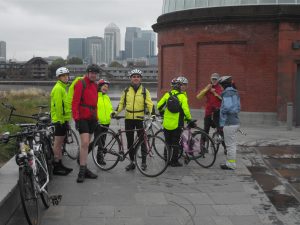 Arriving at the Cutty Sark we found our friends Trevor, Oliver and Sue waiting patiently for us. We greeted each other and were off again, now following the Eastward line of the Southern bank of theThamesinto a steady headwind. Where in the past we had been able to hug the river quite closely today because of regeneration work we were forced onto roads away from the riverside cycle path; this was little more than a minor inconvenience. It also gave us an opportunity to cross another curly-wurly bridge in Greenwich which I knew nothing of. 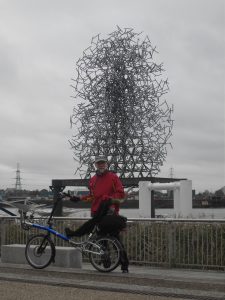 At Woolwich we were hampered by the first of two punctures which struck today. With Steve W on hand the repair was made speedily and we were on our way again. 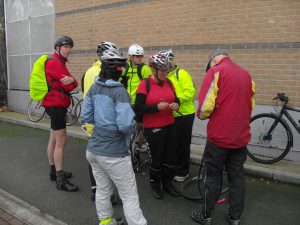 We arrived at the Crossness Pumping Station Site at about 1 pm, the pong was pretty strong in the car-park. Tying up the bikes we headed in.

The Crossness Pumping Station was built by Sir Joseph Bazalgette, an English civil engineer of the 19th century. It was opened in 1865 to improve Victorian London’s urgently needed sewage system and is currently undergoing a long process of restoration. This is a fascinating exhibition which enthralled us for a couple of hours, indeed we would probably stayed longer if time had allowed. 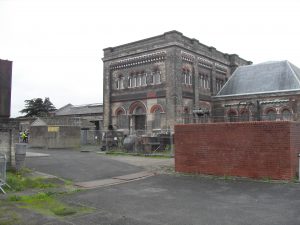 As we prepared to depart we had the second puncture which injected a further delay and although the repair was made expeditiously it put paid to our thoughts of crossing to the North side of theThamesvia the cable car. We set off for the return journey under heavy cloud, but it was dry. This didn’t last for long and soon we were heading through a steady fine soaking rain. At Greenwich Trevor, Oliver and Sue departed from the ride to make their way to their respective homes. The remaining six of us recovered our morning journey and separated at Beckenham/Shortlands.

This was a lovely ride in spite of poor weather conditions. Thanks to Geoff our leader who led us unerringly. And thanks to everyone else for being great company.