What a wonderful ride today, in spite of some less than ideal weather!! 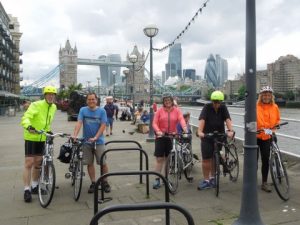 Seven of us gathered at Bromley South under grey skies and a persistent drizzle. Six of us had bikes, one sensible rider had decided to abandon any thought of riding and was going up on the train and would meet us at the museum.

For the life of me I cannot work out why this ride started at mid-day. It should have been a 10 am start but by the time I noticed the strange start time on the site it was really too late to change it.

Although this ride was advertised as a visit to the Cycling Revolution Exhibition at the Design Museum, the real reason was to follow a route shown to me by Jane Davis of Lewisham Cyclists on her very pleasant Tuesday Totter a few weeks ago. I tracked Jane’s route on my phone, and it was so interesting I was determined to use it at the first possible opportunity. We actually did it widdershins but I don’t think that gets me off the plagiarism hook – I hope Jane will grant forgiveness.

Jane’s route follows the new Quietway 1 from Deptford to Tower Bridge and then back along the north side of the river through the old London Docks.

Tracey led us up the Waterlink Way to Deptford and here picked up the route westwards along the beautiful quietway 1 cycling infrastructure through New Cross and Rotherhithe. The best bit is undoubtedly the link which leads from Surrey Canal Road to South Bermondsey Station past the Millwall Football Ground. It is just a shame that the route has to be closed on match days so the visiting football hooligans can be shepherded away from the home hooligans thereby denying them the opportunity to kill or maim each other. Quiet bizarre really, why not just let them fight it out, arrest the losers and send those still standing down to Marseilles to face some tougher opposition. You could probably sell tickets to watch which would help pay the medical bills.

Anyway moving swiftly on. We followed the route from Rotherhithe up to Bermondsey and then located the museum in Shad Thames.

We stayed just over an hour which gave us time to have a cup of tea and some cake and to wander around the Cycling Revolution Exhibition – which we all agreed was very good, well laid out and interesting.

We also met our train passenger member who by now had teamed up with her friend, and they had enjoyed lunch together. The sun was shining and they were very jealous of our lovely bicycle ride.

We crossed Tower Bridge and turned eastwards through the ghastly brutalist style hotel which is sited by the bridge. How this ever achieved planning consent completely baffles me. We carefully followed Jane’s route through St Katherine’s Dock and then into Tobacco Dock where we came across the decaying remains of two old iron sailing ships – The Three Sisters and The Sea Lark, sealed into a dry dock. There did not appear to be a lot in the line of restoration going on. In fact there was no sign of restoration and little evidence of preservation. Which seemed a real shame.

Weaving in and out of the various locks and docks we eventually found ourselves on more familiar territory at the Isle of Dogs and the entrance to the Greenwich foot tunnel.

On the South side of the river we set off towards Bromley with heavy grey clouds amassing ahead of us. We stopped to push our bikes through a street party at the entrance to Ladywell Fields. They had some lovely looking cakes displayed, I think there might have been a rather half-hearted invitation to stop and join in, we pressed forward and missing the ever popular curly-wurly bridge we reached the railway arch at Adenmore Road as the heavens opened. We stopped to shelter and were joined by other folk who had scampered away from their picnics in the park to avoid the rain.

It was a short shower, soon the sun was shining again and we were back on bikes heading to Bromley and the end of the ride.

My computer let me down today so I haven’t got any proper stats but we started at 12 and finished just after 5pm. Distance was around 30 miles and speed was less than 10mph – bliss!.

Thanks Tracy for a lovely ride and thanks to some great riders who were very good company. 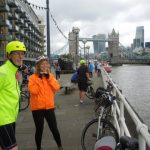 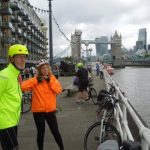 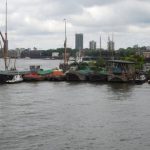 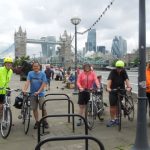 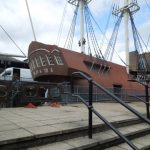 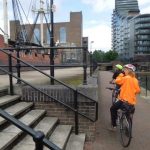 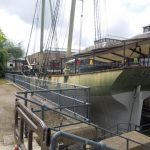 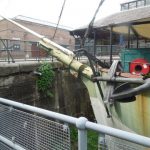 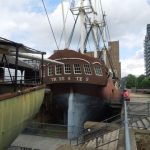 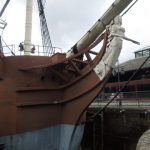 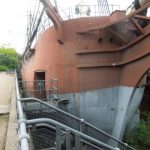 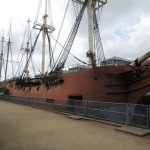 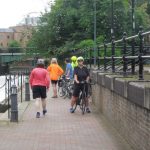 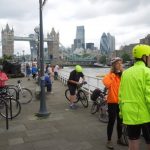