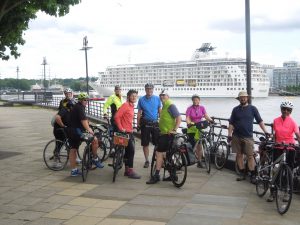 As I arrived at Bromley South I spotted two bicycles parked outside the café on the opposite side of the road. “This cannot be a coincidence” I was thinking to myself as tried to peer inside past the reflection in the window, but I was espied from within; a call rang clear in an accent I haven’t heard for a long time as I was hailed by Helena who was with Evelyn.

With half an hour spare to the start time I decided, somewhat unwisely, that there was time for a second breakfast and so set about a highly unhealthy but rather delicious sausage egg and beans with toast as we caught up with the gossip. The café has undergone a bit of a makeover since my last visit which looks rather nice. And once again I received a warm and friendly welcome from the staff who seem to recognise me nowadays; that’s a bit embarrassing isn’t it?

The café gives an excellent view of the station forecourt so we were able to observe other riders arriving and there were a goodly few. Just before 10 o’clock we wandered over and joined the team.

Tracey was ride leader today, whilst I mostly acted as navigator, though we did change over occasionally where Tracey knew the route better that I did. Tracey gave the pre-ride briefing, and once again took the opportunity to prompt riders to consider joining our parent body – the London Cycling Campaign. The main point of today’s outing was to inspect the new cycling infrastructure which is now coming on-stream in central and inner London, thanks to the efforts of Mayor Boris Johnson and his Cycling Tsar – Andrew Gilligan. We were on the point of departure when Tracey received a call to let us know that a rider was still on the way to join us and to ask us to wait; which we did. By twenty past ten riders were becoming impatient and so we set off slowly after messaging our lost sheep that he would have catch us up (which he did a relatively short time later). So we were ten in number with a promise that another rider would be joining us in London.

At Deptford we located and joined Quietway 1. After a couple of dodgy false starts due to somewhat ambiguous signage we found ourselves confidently following the route of the only Quietway that has been completed. Our immediate observation was that markings on the roadway were more reliable that signage affixed to lamp-posts which can always be mischievously changed to point the wrong way. The second thing I would have to add is that it is becoming very confusing with all these different naming protocols which do not seem to bear any particular relationship with each other – hence we have Quietways (QW) National Cycle Networks (NCN) London Cycle Networks (LCN) Cycle Superhighways (CS). Which, even for an experienced cyclist, is confusing so how much more so for a novice. That said once we got going on the Quietway there was plenty of good quality signage both on the carriageway and attached to street furniture.

We were cycling under a fine sky with lengthy spells of warm sunshine; but when the sun disappeared behind a cloud we immediately noticed the drop in temperature. We held a steady pace and were soon at the path by the Den. This is really hallowed ground – the cycleway not the football ground I hasten to add. As I have previously reported it is a pity this part of the path has to close on match days and hopefully this can be reviewed one day. We continued and crossed Tower Bridge Road which is perhaps the only place where we became a bit confused as to when we had priority. But we passed without mishap and made our way to the Southbank for a well-earned tea and comfort break.

After the short stop we made our way back to Blackfriars Bridge and on the north side of the river we joined the East/West cycleway. This is complete segregation from motor traffic and is smooth flat and luscious. There were plenty of other cyclists whizzing along too; many were on the wonderful Boris Bikes. If anyone is in doubt about the success of cycling in London come and stand on the Embankment for half an hour and your faith will soon be restored.

Under the towering clock over the Palace of Westminster we located our 11th rider without difficulty who joined us as we set off across Parliament Square which hopefully one day will be pedestrianised. The cycle segregation runs out in Birdcage Walk but with little traffic it’s a safe place to ride. We found the open space in front of Buckingham Palace closed to motor traffic with no obvious explanation as to why. We were able to cycle through the cones and thread our way through the hundreds of tourists and other visitors who were taking advantage of the opportunity to wander aimlessly on the carriageway where they would normally be displaced by fast moving and aggressive motor vehicles. Oh how lovely central London could be, and how much cleaner too.

At the top of Constitution Hill we decided we had ventured far enough from the safety of South London so we turned and retraced our ride to the Mall and then to Horse Guards Parade. By cutting behind Westminster Abbey we were able to follow the quiet roads past Westminster Magistrates Court to Vauxhall Bridge Road where we picked up the segregated cycle tracks over the bridge and past the nightmare of the Vauxhall Cross Gyratory; the scene of so many cycling calamities.

We now followed a lovely quiet route through the back streets of Vauxhall and Lambeth to Waterloo and then Blackfriars Bridge where we turned north for the segregated lane to Farringdon. This seems to fizzle out just short of Holborn Viaduct and this is as far as we went on this route before returning to the river and heading east to Tower Bridge for lunch. The segregated lane here is absolutely fabulous.

We took three quarters of an hour for a lazy lunch break and then walked our bikes across to the slip road to what was the Thistle Hotel but masquerades as something different nowadays. The traffic on the Tower Bridge Approach was jammed nose to tail for which ever direction you wished to travel. Is this the fallout from the East West Cycle Super Highway perhaps?

Turning east along the hotel service road we cycled through St Katherine’s Dock and then followed the alternative to Cycle Superhighway 3 through Tobacco Dock where we marvelled at the two rusting iron sailing ships so desperately in need of restoration. Threading our way alongside numerous water ways and wharves we eventually made our way onto the Isle of Dogs and so to the Greenwich Foot Tunnel where we found that the lift on the north side was frustratingly out of order. And what’s more no-one appeared to be mending it. I am firmly of the view that when the lift is broken down there should be a council operative deployed to hand anybody who has to use the stairs a nice crisp £10 note for their trouble. When the council man is not handing out tenners he could also assist by carrying wheel-chair and mobility scooter customers up or down the steps; I have a theory this would help concentrate the minds of the lift owners!

Once back on the south side of the river some riders felt confident enough to take a comfort break. I can understand them holding back whilst still ‘up north’. Whilst we waited to regroup one rider nipped ahead so when we reached the bridge over Deptford Creek we were hailed by Alison who had bought us all an ice-cream – they were much needed, delicious and gave us all the energy for the final leg along the Waterlink Way to Bromley.

Thanks to Tracey for leading a fantastic ride; and thank you riders for being great company on a lovely day out. 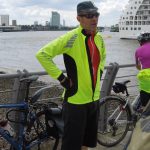 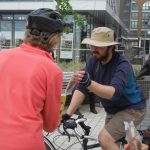 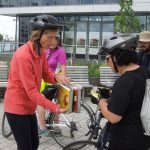 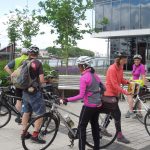 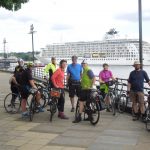 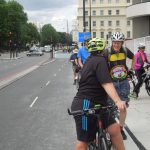 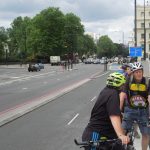 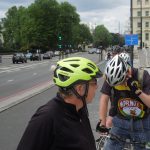 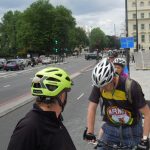 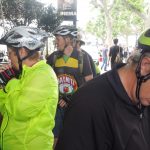 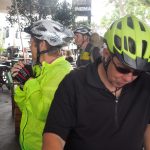 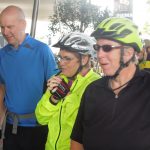 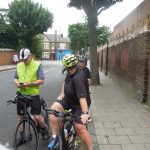 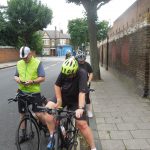