I hesitate to put pen to paper about this ride. It isn’t a Bromley Cyclists outing so I feel a bit cheeky; but here goes anyway.

I was just finishing off my cup of tea in the little cafe outside Orpington Station when the first wave of cyclists burst out of the exit from the platform and began to mill about. I wandered up and made contact with Fabricio who informed me that he was indeed with the Tower Hamlets Wheelers Ride and Alex the ride leader was on his way. During the next 20 minutes various trains deposited further cyclists who joined the throng, among then was Alex.

We were about 20 strong and Alex diligently passed amongst us ticking us off on his list. As a newbie to Tower Hamlets Wheelers I had my name and contact details taken.

Once Alex was satisfied he had us all properly logged he gave a  briefing, introducing Colin as his assistant ride leader and tail-end charlie. He was very careful to warn us of potentially icy conditions, and tell us to ride carefully, particularly going downhill.

Briefing done we were off, it was immediately clear this would be a bit pacier than I was used to. We crossed the Orpington by-pass and turned towards Chelsfield and Shoreham. 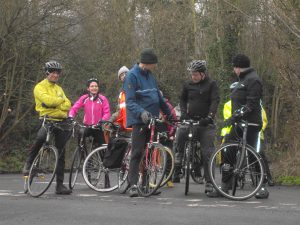 At the bottom of Polehill we joined the Pilgrims Way and headed East; as with our ride last week we kept the North Downs ridge to our left and enjoyed the views over the Weald. The weather was cloudy and very cold but the undulating nature of the ride was keeping us warm.

At Kemsing we turned south and passed through the outskirts of Sevenoaks and found the most peculiar gateway into Knole Deer Park. The gate allowed us access the park one at a time and the whole performance took nearly 10 minutes. Most bizarre really, I can only imagine it’s just to keep the wild deer from escaping but perhaps they do not really welcome cyclists at all. Anyway whatever the reason it didn’t feel very inviting. 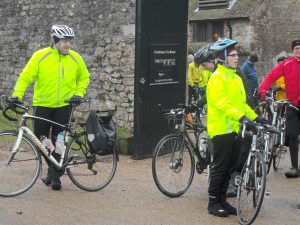 The park was beautifully manicured and we made our way along the gravel drives to the imposing Knole House, we could see the deer on the skyline, many of the stags were displaying magnificent head-sets. We didn’t get closer but I could see folk with their cameras up quite close and personal with the herd. Knole was an imposing pile from some bygone era, apparently it is a National Trust Property nowadays; it had toilets and a cafeteria. Here we would take our morning break Alex informed us; I for one was ready for it. 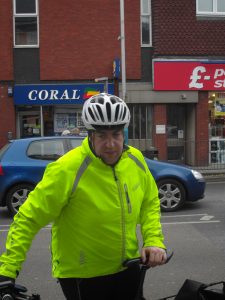 The morning’s ride had been hard going and I think we were all grateful to get our breath back and refuel. But it wasn’t long before Alex called us to order once again and led us onwards. This section we were informed would be somewhat flatter and less arduous than the morning session; and so it proved. At the far side of the park we repeated the ‘one at a time through the gate performance’ to get out again. 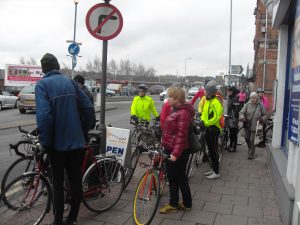 By 12:30 we had reached Tonbridge and it was decided this would be a good place to have lunch. We ‘tied up the horses’ and split into smaller groups; a few of us found a delightful little cafe in the high street where we had a very pleasant meal.

When we emerged from the cafe it had started to rain – gentle, but steady rain. We set off along the muddiest imaginable track past the playing fields that Eve led us along on her Penshurst Ride last year (report here). I must admit that some of the lovely summer sunshine we enjoyed on that ride would have been most welcome today. We passed through the grounds of Penshurst Place and reached the pretty village of Penshurst. Here we turned north and began our homeward journey. Passing Bowden Beech Reservoir we became aware that the road ahead was beginning to climb. Roadside signage mentioned Ide Hill – another of those North Kent mega hills of legend. Sure enough the climb became steeper and steeper and the going slower and slower as we struggled to tame the beast. At the top we found snow lying in some places. 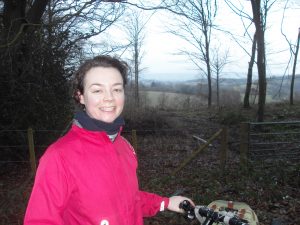 There followed a pretty uneventful ride down into Sevenoaks where we said our goodbyes and separated onto our homebound trains. 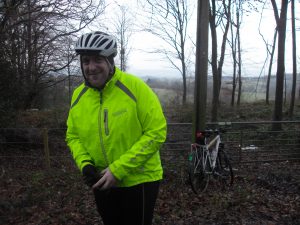 Today’s ride was hard and really not for the faint hearted (my computer has recorded over 50 miles), but it was highly enjoyable and very scenic.

Thank you to Alex and the Tower Hamlets Wheelers for making me so welcome on your lovely ride.