Thanks are due to our support car driver, who gave up his nice warm bed to toil around East Anglia in the rain, thunder, lightning and darkness to provide a first class back-up service to our riders. Thanks Bruce, thanks also to our Borough Coordinator for providing the support car which enabled the Bromley DD Ride to become a reality. 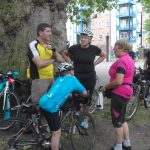 Six of us – Spencer, Jack, Eve, Linda, Karen and John (author) met at London Bridge and cycled gently up to London Fields to join the hundreds of other riders nervously awaiting the distribution of the route cards. The air of expectancy was almost tangible. The weather did not look or feel very promising! The sky was overcast, but most of all atmosphere was stifling. The forecast was for rain and it was clear that a storm was needed to clear the air. 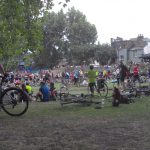 At 7.45 pm armed with our copy of the route – purchased from Southwark Cyclists for £1 – we set of into unknown. It was soon obvious that reference to the route plan was going to be largely unnecessary. All cyclists were heading the same way; it was simply a case of follow the person in front.

As we passed through Epping we could see large puddles of water on the road – there had been a substantial downpour, the air remained muggy and sticky. As we crossed the cattle grids we took the opportunity to stock up on last minute stores from a petrol station.

We made excellent time as you can see below from the ride stats. The pace on this stage was very quick, something that, with the benefit of hindsight, may not have been as wise as we thought at the time.

As the evening light faded riders switched on their bike lights: lines of wriggling red tail lights stretched as far as eye could see.

There were lots of groups of club riders on today’s ride. Dulwich Paragon was strongly represented, but there were many others, from throughout the nation too. In some ways this is a shame – this ride originated as a chaotic, disorganised migration of bike riders, which feels like it is slowly being shaped by the forces of commerce into something that is ready for the dead hand of marketing to recast. One cannot but make the comparison with events such as Glastonbury. Mark my words it won’t be long before this becomes the “Direct Line Dynamo” with all that entails especially entry fees, charity fundraising and corporate branding. Ugh!

Our first stop was at Great Dunmow after about 35 miles and we turned onto the forecourt of the Kicking Dickey at 10.45 to find our support car laden with supplies and goodies. The plan was for a 10-15 minute break and then back into the saddle before we stiffened up too much. This plan was pretty much on schedule until the arrival, just as we were preparing to depart, of the long threatened rain. And how it came; great rods of water shooting down from the heavens. We waited in the hope that it would pass. It didn’t and so we set forth into the deluge; we were soaked seconds. By now the roads were running with water, cyclists wove left and right to avoid puddles, potholes and great pools of standing water and were lashed by sheets of spray from passing vehicles.

The topography of Essex is completely alien to us Bromleyites; where we are ‘blessed with a hill at every turn Essex is flat, flat and more flat! Not boring though. The second section of our ride was hillier than the first but nothing in comparison to what we are used to; coupled with the weather this made this section hard. Eventually the rain abated but our ride continued under thick heavy cloud and dank murky mists. There was supposed to be a full moon, but apart from a very brief glimpse she remained elusive. One of our riders also ran out of energy on this section and had to be supported most of the way to the next meeting with the back-up car where he was provided with fresh dry clothes and secured in the comfort and warmth.

The second rendezvous with Bruce enabled other riders to change into dry clothing and it has to be reported that certain riders were less than concerned about the lack of changing facilities; fortunately most of the good folk of Sudbury were sound asleep and so spared this spectacle!

Having secured the welfare of our disabled rider we were able to increase our pace again although I’m not convinced he seriously delayed us anyway. We were now cycling through the dead of night. Little stirred; we stole silently through slumbering villages, hamlets and sometimes a small town. Our presence marked only by the swish of tyres on tarmac and the endless line of bicycle lights. Our next stop was to be Framlingham. We were loosely grouped now. Occasionally we either caught up with or were caught by other riders, reserves were being drawn down now. The need to move being powered not by energy but by adrenaline! Eve and Linda both suffered a puncture during this leg of our journey, Eve under the cover of darkness, Linda more fortunately in daylight.

Whilst separated some of us took a wrong turn and so found ourselves approaching Framingham from a different direction meaning we missed the support car. It was not until we had cycled uphill through the town that we realised our error. Spencer rode back to meet Bruce so that he could team up with Eve who was playing catch-up after her puncture, and Karen who was with her. Linda and I decided to skip the RV so we waited by the roadside as the daylight improved just watching the hundreds of cyclists passing us. Graham and Dave pulled over to have a chat with us; we didn’t know they were on the ride. We had also spotted Shaun MacDonald earlier in the evening and later when we got to Dunwich we bumped into Dave Bagley and Alex Raha – Bromley Cyclists were represented in strength on the Dynamo.

Eve and Karen were delayed with the puncture longer than expected and have asked me to record their gratitude to two knights in shining lycra who stopped to assist and even gave them a replacement inner tube when Eve’s own one failed. So chapeaux to Brett and Rupert – thanks guys

Linda and I decided to press on alone, and it was then that Linda discovered she too had a flat tyre – hmmm tiresome if you’ll pardon the sad wordplay. How much more tiresome when we eventually restarted and discovered that we had stopped to take a rest just 100 yards short of an official tea/coffee station.

From Framlingham we had another 20 miles, a bit lumpy in places, but nothing too testing. Eve had told of us of an alternative route which would have cut out a nasty gravelly side road after Peasenhall but as she was not with us Linda and I stuck to the main route. We spotted a barn owl on a long low flight across the fields. It was great to watch this pale majestic bird gliding lazily over the terrain in the gathering daylight.

At last we spotted the road signs for Dunwich – 5½ miles then 2½ then signs to the beach tired legs worked just a little harder to up the already breakneck pace and at last the Ship pub came into view and finally the sea. We had arrived; Linda and I about 10 minutes ahead of Eve, Karen and Spencer. 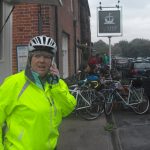 The car parks, the sea shore, the roads, the pubs, were packed to bursting with weary cyclists triumphant in their achievement. We located Bruce and loaded the bikes onto the roof of the car, and then retired gratefully to the beach café for a full English. 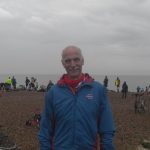 A wonderful night out; well-done riders you were great cyclists and great company!