Today’s ride started life as the Sevenoaks Wildlife Reserve Ride. However it was changed, when we realised that it clashed with mothers day, to a shorter loop ride to Eynsford. I have to comment that quite what impact this had on my mother escapes me. I was not aware that she ever intended to come cycling today and in the end she didn’t. 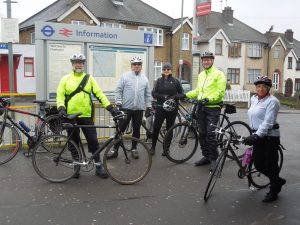 The early pick-up at Norman Park netted one rider – Joe. We set of for the Orpington rendezvous via Crown and Magpie Hall Lanes. This time I managed to follow the route to Shepperton Road which is something I have wanted to do for a long time as I believe from Beckenham this will be a quicker route for me in the future.

The weather is always a feature of a bike ride. We of course know that part of our English heritage is an almost fanatical obsession with the the weather. And never more so amongst those who cycle. It was cold this morning with a biting wind from somewhere in Russia or near the North Pole. There was rain in the air and heavy rain was forecast, so not such a great day for a bike ride. Don’t you believe it; there are two  types of days as far as bike riding is concerned – good days and even better days.

I stopped to take a picture of the vile little tunnel under Orpington Station, it looked no more attractive in the daylight than on my last visit. 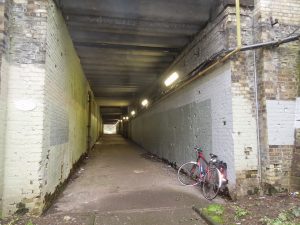 Outside the station I found 3 more riders waiting and we were soon joined by a fourth – none other than the legendary Steve Watkin. I had already heard from Linda who was to meet us en route. So just after 10:00 we set off for our ride. 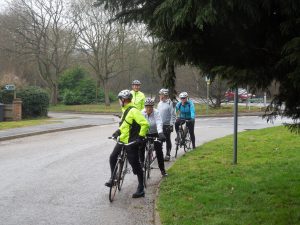 At Green Street Green we transferred onto the cycleway alongside the A21 and made good progress to Pratts Bottom where we decided that rather than take the gentler Watercroft Road to Halstead we would go hardcore up Stonehouse Lane. Hard work but we all made it with most not having to walk except one rider with a single speed. 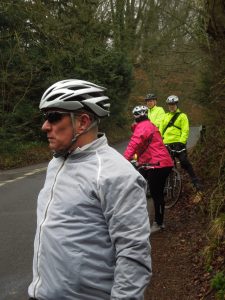 At the top of Polhill we waited for a few minutes and were soon caught up by Linda who had ridden like the wind to chase us down. So we were now seven. 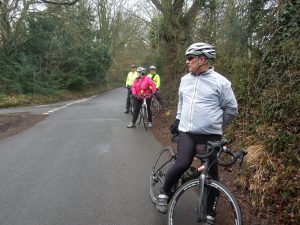 The path down Polhill gets ever narrower as the vegetation gradually creeps further and further across the remains of the old road. Rubbish and discarded debris litter the route making the descent on a dry day dodgy and positively dangerous in wet conditions. Fortunately there are two substantial bollards at the entrance to the path which prevent tipper lorries from reversing down and fly-tipping otherwise I am sure this route would have been completely blocked years ago. The tunnel under the M25 plunges the rider into complete darkness, so if there is anything obstructing the carriageway there is almost no chance of seeing it; fortunately there wasn’t so we all made it safely to the far side. Here we briefly regrouped in the parking area which is clearly a relative of the previously mentioned tunnel under Orpington Station, but slightly more disgusting. 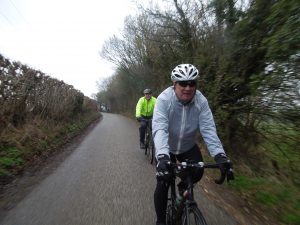 From here its just a few undulating miles to Lullingstone, we passed the lavender fields, the neat rows of lavender looking akin to the popular cane row hairstyles.

At Lullingstone we stopped for tea and cake. It was nice to be able to warm up for a while. The wind was biting. What a contrast to the visit with the Bigfoot Training Ride last Sunday when it was lovely sunshine and scores of cyclists thronging to get refreshments.

Refreshed we remounted and once again elected to follow the agricultural riverside route so avoiding the the rather nasty A225. The cross country route was a bit greasy under the rain but it was easily traversed and we soon rejoined proper metalled roads at Lullingstone Castle.

It was here we decided to try a bit of an alternative route and so rather than go all the way into Eynsford we turned off towards Eagle Heights. I have long known that there was a detour here but have never really had the opportunity to research it. But Steve and Eve were familiar with it and so it seemed an ideal opportunity to do a little exploring. Unfortunately one rider had shot off ahead but we regrouped with her a bit further on where the the short cut met the proper route.

Turning left off the normal route we toiled up the steep long hill to the farm at the top of the lane. After negotiating a couple of gates and barriers we made good time to the tunnel under the M25 and so eventually emerged on the normal route at Crockenhill Football Club. This proved to be an interesting alternative which I shall use again however the hill is long and steep so it probably won’t won’t become a regular detour.

From here it was just a few more miles back to Orpington where we arrived well before 1 o’clock so everyone was in good time to get home and celebrate their mothers.