(Well some of us go again) 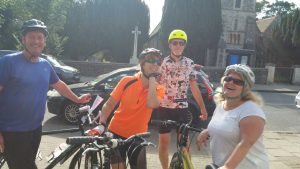 Those of us who took part in the B2B ride earlier this year thought it would be good to do it again (ye fools!) but the other reason was to give the opportunity to one of our female riders to attempt the ride for the first time. Having completed all the training rides, she elected to go on an intoxicating hen weekend in Portsmouth on the original ride weekend.

We all decided to ride the prescribed route by Bromley Cyclists/Bigfoot which entailed going over Devils Dyke. (not the other scenic route which also uses the A23)

As the weather was going to be hot, we opted for a 0800 start from Panagua Bikes, but due to the dreaded school traffic, some of us were late and we eventually started at 0830.

Few of us needed a comfort break on route so the porta loos by the tennis courts at Wallingham School proved to be very useful. They were surprisingly clean considering the school had just broken up for the summer holiday

We had a pleasant ride to the first stop, The Bell Pub, arriving at 1110. The pub doors were open but it was yet not open for serving alcohol but they very kindly served us tea, this time in large china cups and teapots!

Having refuelled our drinks bottles we set off again. The temperature was rising so we needed plenty of liquids. We reached the second watering hole, The Victory Inn at 1345 and stopped for lunch. No vintage vehicles this time but there were some young primary school children doing cycle training. Good to see them start so young.

Now the final part and Devils Dyke beckons. I do not know if it was the heat (it reached around 28ºc) but this stage seemed to go on for ever and having seen where the A23 cycle path started, that route would have been much quicker. We reached the summit, filled the bottles again at the golf club, had a photo shoot and set off for Brighton arriving at the beach at 1730. Time for a well-earned ice cream before setting off to the station for the train back to East Croydon. Thanks to our photographer, Smitta, who kindly took all the photos, but abandoned us at Brighton as she stayed with her friend at Hove and travelled back the next day

We arrived back at Hayes just as the church clock was chiming 8 pm all very tired!

Many thanks to Kevin our ride leader, who never got us lost. With his trusty crib sheet strapped to his handle bars, he kept us on the right route. Only on two occasions did he need his iphone with GPS to verify the direction. A future ride leader in the making we think.