A ride report by Mark: 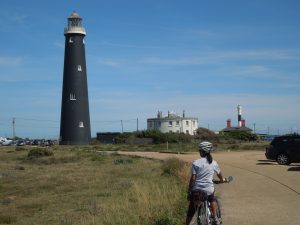 There were seven assembled at Orpington Station for the 9:07 to Folkestone.  One was late, guess who? The huge queue for Tickets meant John literally had to run for the train.

Still the weather looked bright and we were hopeful of a sunny seaside day.

Nattering away, it wasn’t long before we arrived at Tonbridge where we were joined by Inci.

It’s quite a long journey down to Folkestone, but by 10:30 ish, we were on the road and ready to roll.  Literally roll down the steep hill into ‘The Leas’ a pretty park, overlooking the sea.

Heading west along the coast, we turned inland at Seabrook to pick up the Royal Military Canal.  This is a pretty part of the Route and a couple of Wildlife enthusiasts managed to spot some Giraffes, (is it a ‘herd’ of Giraffes?) as we cycled along the edge of ‘Port Lympe’ safari park.

About 10 miles into the ride we stopped for tea in Newchurch.  It was 12 and they weren’t open.  A bang on the door and they sprang into life.   Tea was courtesy of John.  “We thank you”.  Every year Linda says she is going to go back with Jay for dinner.  So here it is Linda, book it… http://www.newchurchhouse.co.uk/

Refreshed, the slog began, as we headed out into the open and felt the force of the sea winds, and we were cycling straight into it. Through Ivychurch, Old Romney, Lydd then turning off for the Dungeness Nuclear Power station.  It was a relief to see the black of Dungeness lighthouse and to know we had reached our most southerly point, meaning the wind would now be behind us. We cycled past the mini railway, through the pebble desert and amongst the black former fishing buildings.

Thirty miles into the ride, it was time for lunch at the Pilot Inn.  There was ‘chips’ with everything.  Even those that opted for the healthy options were served with ‘doorstoppers’ of sandwiches.

The sun was warm and the breeze was cool, it was a pleasant rest.

After lunch we were off again, due north on a stretch of Road with the sea to our right.

We reached Littlestone Golf club and cycled passed the Romney Bay House, hotel, where it was commented that this is a ‘gem’ of a hotel, allegedly a hugely romantic venue.  It was here that our very own Tony, proposed to his wife.  On one knee, we are told, with a thorny Rose, bit tight between his teeth.  We all know him for his love of romance.

Now we are on the sea wall and the riding was easy, I reckon we had an 8mph tail wind, passing St Mary Bay and Dymchurch. There was literally miles of beach with very few people.  The sea wall runs out at ‘Hythe Ranges’ and we’re forced onto the through road with a little more traffic, until we reached the Military Canal at Hythe.

All stop at Waitrose at Hythe; two of our more determined scoundrels nipped past security (it was closed) to run into in to buy some ice creams, courtesy of our Ride leader Tracey.  We thank you.   A brief break on the banks of the canal in the sun, was welcome and well received.

At the Hythe Imperial Hotel, we make our way back to the sea front, we have both warm sun on our backs and a decent wind.  West the whole way to Sandgate and Folkstone.

One dreaded hill later and everyone is checking train times home.  “10 minutes, oh we’d better get a shift on”!  We all made the train, juggled the bikes to fit and some sat for a natter, one much louder than all the others. 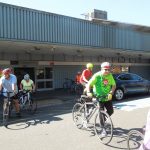 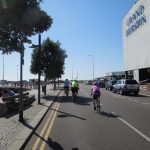 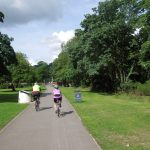 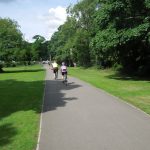 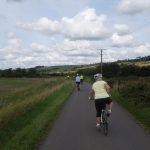 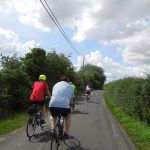 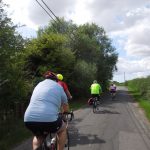 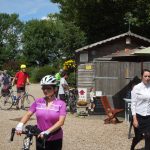 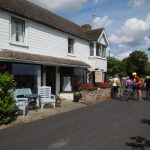 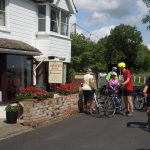 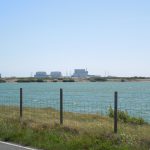 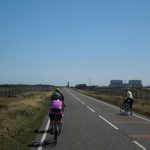 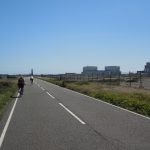 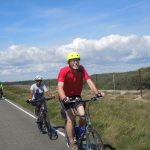 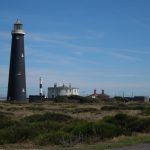 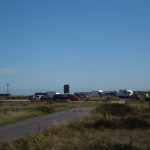 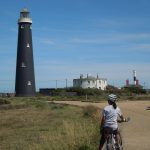 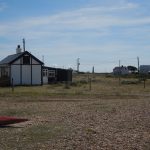 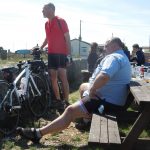 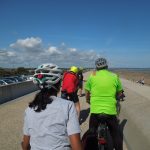 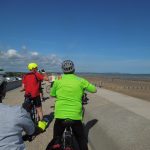 It was a great day. Great weather. Thank you ride leader.