When I heard Carol Mirkwood on the TV yesterday and Thomas Crakannacker this morning warning us about rain of near biblical proportions I thought to myself we’ll be having a dry ride today then. So it was thought, so it was indeed. 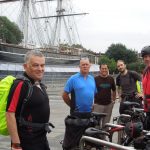 As I set off from home to join this ride there were just a few residual spots of rain in the air following a pretty heavy downpour. Thereafter the day was dry and as far as the afternoon was concerned beautifully sunny. Millions of pounds of tax-payers money are spent annually on weather-forecasting – and for what. The only time they get it right is when they hedge all their bets in one day – sunshine, showers some wind, pollen count very high to very low. I’d rather squander a hundred quid on a lame dead donkey to win the Gold Cup than rely on the predictions of Carol and Thomas at the BBC. 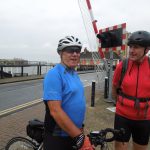 Anyway to the ride; absolutely wonderful. Brought to us by the renowned Hughes/Fergar partnership it was a classic. 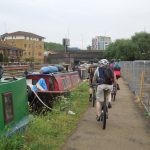 At 9.30 am six of us set off through the Greenwich Foot-tunnel. Even the breakdown in the southern lift again was not about to dampen our spirits. At 10 am we were joined by two more riders at Limehouse Basin, and once introductions were done we were about to get going when we were approached by a woman cyclist who was riding back down her route to find her phone and other valuables which had fallen from her bike earlier. She initially thought we had found them and was thanking us profoundly when we all realised the error. We suggested she called the phone using one of ours; this she did and was amazed to hear her friend’s voice answer. The phone had been found and used to call her friend who had collected it, but had no way of communicating the recovery. So all’s well that ends well and if that wasn’t an omen for a great day ahead then I don’t know what was! 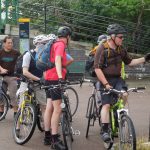 The riverside path at the northern end of the Isle of Dogs has been quietly reopened so this meant we were able to avoid the nonsense of the very cycling unfriendly and dangerous Canary Wharf Gyratory. Trevor’s transition from the Isle of Dogs onto the Lea Valley towpath was generally much better than the one I usually do when I lead the ride down the river from St Alban’s, so this is carefully noted for future use. One of the problems of riding the towpath at this time of year is congestion, particularly with pedestrians. We found that the path was busy but it could have been so much more so and by making courteous and careful progress conflict was avoided and the path served for all. 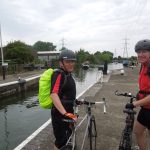 Our Ride Leaders at Pickett Lock

In the southern reaches the river was badly clogged up with duckweed. In places the water surface was nearly invisible because of the stuff, methinks some treatment is needed here. Further north we saw signs warning us to keep a watch out for otters. The presence of otters on a waterway is a clear sign of a healthy eco-balance so well done to all who have been working on this. 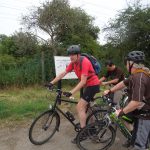 At about 18 miles early lunch was taken in the Canal Boat Cafe north of Enfield just after the river passes under the M25. We were made very welcome and were soon served with hot tasty teas, coffees and food. We sat in the sunshine chatting and watching the life on the water pass us by. 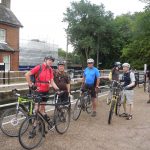 At 1 o’clock we were back in the saddle and pressing onwards. I spotted a heron hiding in the shadows under the river bank its bright beady eyes scanning the water for a meal. It took no notice of us and we passed on by. There were fewer pedestrians now, whether they were all having lunch somewhere, had been put off going for a walk by Carol and Thomas or simply had other duties to attend to on a sunny Saturday afternoon I suppose we shall never know; anyhow it made our progress along the path more pleasant. 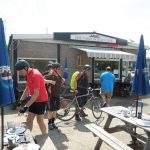 At Broxbourne I had reached the limit of my knowledge of the area, and soon we were in Hoddesdon. Here the River Lea is joined from the East by the River Stort. As is so often the case where rivers join there are large expanses of open water making navigation – aquatic or on land – a bit hit and miss. Threading our way through a maze of weirs, locks, lakes and bridges we slightly lost our way a couple of times, but I always see this as an opportunity to see extra bits of the landscape. Anyway these were but minor deviations and the ever reliable Trevor soon had us back on the right path heading for Hertford. As I have said this was new territory to me and I must say that if anything this part of the ride was even more enjoyable than the southern part. We had left the heavy industrial landscape behind us now and were in places passing open pastures, fields and meadows. We could see fields of cereal ripening in the glorious sunshine. There were some very nice houses along the riverside here too, for which some very nice prices have almost certainly been paid! 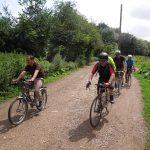 Arrival at Hertford came almost as a surprise, one minute we were bowling along the riverbank the next moment we were rolling onto the station forecourt. We had a 10 minute wait for the next service to Liverpool Street which gave us the opportunity to buy drinks from the machine on station platform and buy train tickets. The latter being straightforward thanks to a helpful member of the railway staff, the former being nigh on impossible as machine determinedly refuse to accept our coins and render the goodies! 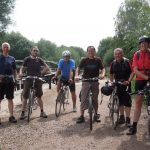 The train was usefully equipped with a bicycle compartment where we could tilt the seats up and stow are bikes safely for the journey to London. 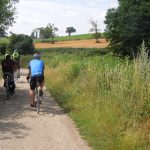 We went our separate ways in Town some to the pub others heading straight for home.

A great day out; thanks Trevor, and to co-pilot Andrew. This ever reliable team have produced another lovely ride out!