The beeb said it would be sunny today. I took my waterproofs. What the investment in the meteorological service is spent on one can only guess at. It certainly isn’t weather forecasting skills. That said it was still a nice day; mild, still, fresh; there was high cloud but it was thin and unthreatening. It was bright and fine; a lovely day to be cycling, particularly in North West Kent. 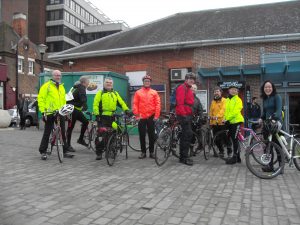 Eleven of us set off from Bromley South; a goodly turnout by any standards and certainly on a winter day in mid February. Some new faces, and some who we haven’t seen for a while too. 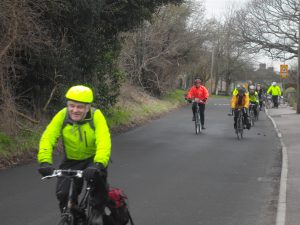 We headed out past the Eastern entrance to Norman Park to and through Hayes and then found ourselves descending an horrendously steep Hartsfield Crescent towards the wonderfully named Jackass Lane, passing Nash Lane we continued to Keston parish church on the road to Biggin Hill. Here Andrew opted for the quiet roads and we turned towards Cudham and Downe. It was now we began to meet the dozens of cyclists on the roads today. Pelotons from DeVer, Old Portlians and others I didn’t recognise, in their bright liveries, zipping and zooming past and through us. 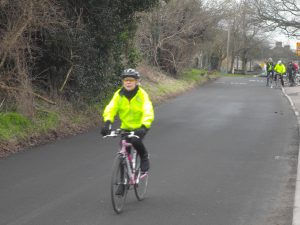 Cacketts Lane into Shelleys Lane brought us to Knockholt. And a little further on we reached The Cock at Halstead where Andrew called us to a halt for lunch. It was 5 to mid-day; we had to wait for the pub to open – it is many, many years since I have done that. We received a warm welcome in the pub and they were happy to serve us with a very satisfying lunch. 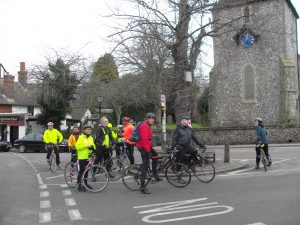 Taking a breather at Downe

An hour later we were suitably refreshed and so we got back into our saddles and pressed forward again. Now we were ten, one rider having pulled away at the restart. 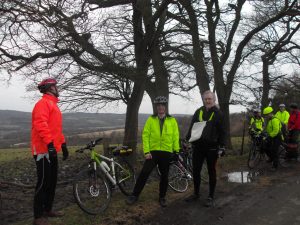 We retraced our route through Knockholt, Downe, Keston and Hayes. I peeled off at Norman Park.

This was another super Andrew Fergar 30 miler. A great ride with great riders.