There were 4 riders at Bromley South to start today’s ride. We waited a little while in case anybody else turned up and then set off towards Shortlands, Beckenham Place Park and the Waterlink Way. It was a steady, unhurried, rather languid ride under a pleasant afternoon sunshine occasionally obscured by heavy cloud. We thought at one point it might rain but it didn’t. At Catford Green we paused to inspect the building site which still blocks the route through to Ladywell Fields and means that we have to get off and push our bikes along the pavement. The road here has mostly been resurfaced but there is a small section which is screened off, which still needs to be completed and opened up. My suspicion was that this was being used as a parking and storage area for plant machinery and construction materials, and so we managed to find a gap in the screen and peer through and so were able to confirm that this indeed does appear to be the case, once I have finished writing this post I shall be emailing Lewisham Cyclists with a request they take this up with either the builders, the council or preferably both. 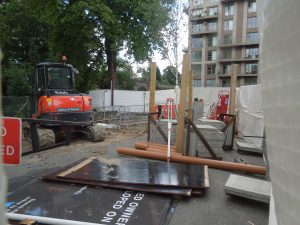 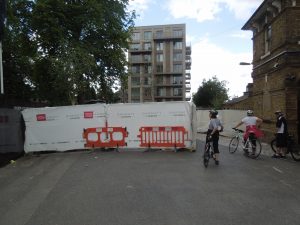 We arrived in a very crowded Greenwich just before 3:30 pm I made our way to Creek Road where we located the ‘Made in Greenwich Gallery’. We were able to lock up our bikes almost outside the premises and then made our way inside. The proprietor was waiting for us and we were warmly welcomed, and were offered soft drinks, teas, coffees biscuits and crisps. We took our seats and a little later than advertised Steve from ‘Men in Sheds’ arrived to talk about the bird box project. Unfortunately we had to leave before he had got as far as his demonstration. 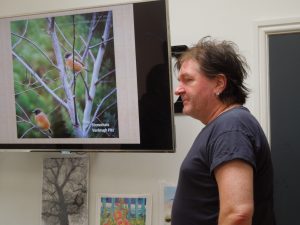 Steve from Men in Sheds

The return journey was slightly quicker and we reached Bromley by 6:00 pm said our good-byes and headed off for the big big Saturday night.