How I became a Wednesday Wanderer

Sarah tells us her story 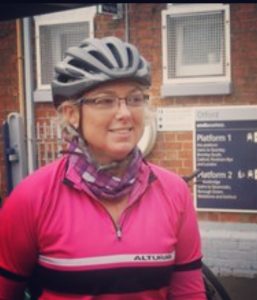 “Children all grown up and finding a little more time on my hands, I wanted to add a new dimension to my life. I was looking for an opportunity get out into the fresh air, meet new people and keep myself fit. I decided to re-kindle an old hobby and looked out for local cycling groups; a search on Google and Meet up led me to the Bromley Cyclists Website and their Wednesday Wander which sounded like a great place to start. A midweek, 10 mile ride out and about in the Bromley area, ending in a local pub.

I’d not cycled in a long while but had been going to the gym and knew I could manage the 10 mile distance. After emailing the group, I soon received a friendly reply telling me the routine. Meeting point, Bromley South Station at 7.30 pm, 10 mile ride around the area ending in a local pub.

A little nervous, I arrived early and waited by the bike racks, there were no other Wanderers in sight. Hmmm! After hovering a little longer, thinking I’d got something wrong, I was about to go home when I spotted a group of 8-10 cyclists chatting together at the front of the station. Plucking up courage I stepped forward and very soon found myself being introduced by name to a friendly bunch of folks, I was thankful no one was wearing too much Lycra either.

After a shortish discussion one of my new friends was appointed the leader, we set off at a very sensible pace on a sort of wide circular route along some pleasant cycle paths, ones I had no idea existed. After cycling for an hour or so the group made its way to Bromley North where we located the Anglesey Arms in Palace Road. With bikes all locked up the group congregated in the pub garden where we were joined by more cyclists, we stayed and chatted until closing time.

Within a week, I was out with the group on a superb 50 mile ride to the Kent coast and despite my 30 year old bike and my having no idea I could cycle that distance, I had a fantastic time and became thoroughly hooked. A great way to get out and about and meet new folks. Give it a try, you might be pleasantly surprised!”