This was probably the best day of the year for a cycle ride, and thank you Andrew (and Trevor) for making such good use of the opportunity. 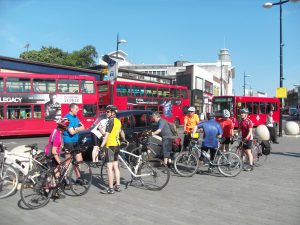 Bromley South was bathed in glorious summer sunshine as we assembled. There was a distinctive smell of sun tan lotion in the air. I don’t think I have ever seen such an array of navigation gizmo’s; if you didn’t have two on your handle bars you were a bit of a lite-weight, no chance we were going to get lost today. At 9.30 there were twelve of us and Andrew called the ride to order and led out. We were quickly along Hayes Lane on our traditional southbound route away from the town centre the pace was high, in fact by the time we reached big Foot Cycles we had already lost one participant, Jody, which was concerning. Heading out through Keston along Fox Lane and Layhams Road, it was clear there was a lead group who were keen for a race. Now my mantra is ‘the only race is the human race.’ Us slow coaches paused in Layhams Road by which time a break-away had formed a separate ride, we drew breath and restarted – now we were eight; mixed ability but travelling at the pace of the slowest (me).

The problem with electrical navigation kits is that they don’t always recognise when a route is not a route. There was a brief pause inLayhams Road where NCN 21 was signposted into a hedge. Our leaders were not fooled and safely led us on a convenient alternative. 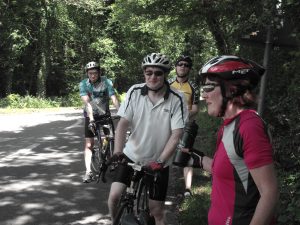 As we passed the White Bear towards Chelsham we saw a helicopter hovering above New Addington; a sort of grim airborne tribute marking the sad events of that estate in the past week. Slines Oak Road was blocked and marked as closed; Rob spoke to a passing motorist coming up the road who confirmed that, with care, it was passable; we pressed on. There followed a long steep ride up Slines Oak Road to and through Woldingham. I think we were all privately hoping that this was one of the hills mentioned by Andrew on the website; we were soon to be disabused of this ridiculous notion. We crested the ridge and freewheeled down the other side across the M25 and into Tandridge. It was notable that there was a 10% downhill sign on Tandridge Hill Lane which seemed a much lesser slope than Slines Oak Road where I saw no such signage.

Marlpit Hill led us to Marlpit village where we turned towards Four Elms. It was here that we encountered the first of several motorists who were not enjoying the summer feeling and hurled abuse because we were in his way. There was a brief robust discussion before the gentleman concerned, who actually made Neanderthal man look quite advanced, decided that 8:1 odds were not really in his favour and disappeared. Andrew informed us that we had completed about 23 miles of the ride and would be dining at the top of the most serious rise on the route at about 25 miles. At this point I could see no obvious geography suggesting the proximity of such a beast. At Four Elms we joined Toys Hill Road which at first seemed quite innocuous but rounding a corner we were confronted by a wall. ‘How strange’ I am thinking, here I am merrily cycling along a road which suddenly ends in a wall when Andrew sidles up alongside and informs us that although it is vertical this is not a wall but the infamous Toys Hill! OMG!!

Toys Hill has two elevations (good word that, in this context). Approaching from Brasted, Toys Hill is a hideous, mean, surly lump; a nasty piece of work you wouldn’t heap on your worst enemy (Andrew!!). However approaching from the south, as we were, Toys Hill is infinitely worse, the stuff of nightmares, it just goes on and on, and up and up. Toys Hill does not trick you with false flats and crests; it just goes unrelentingly skywards. This southern escarpment is absolutely merciless; grown men cast themselves into the abyss rather than tackle this relic of a time when southern England was a continental mountain range and where neolithic man rode the pre-historic Tour de northern Gaul. 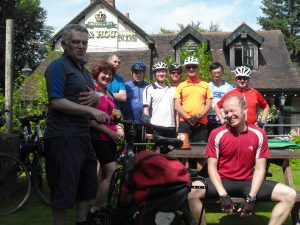 At the top of Toys Hill

The one consolation of this awful climb was the Fox and Hounds Pub aloft the highest point where we were able to dismount, draw breath and enjoy a restorative lunch in the garden. Here we also found our runaway group looking revoltingly fresh and unflustered (probably hadn’t even broken sweat on the way up). We lunched and chatted (and cursed Andrew). Chi, recently arrived from the Liverpool area, was on his first ride with us, we apologised for the hill and explained that he had just been unlucky and we usually just went on normal rides and that he wasn’t on some bizarre initiation ceremony. Chi took it well with all considered.

Andrew showed us a map and elevation chart for the homeward section of the ride. Unbelievably it showed a further hill of similar dimensions ahead of us. We reluctantly departed the Fox and Hounds having managed a group picture. Brasted Hill did not live up to Andrew’s map and chart. I wouldn’t describe it as a pussy cat but, for those who had ridden up the southern face of Toys Hill and survived, it was manageable. We re-crossed the M25 and hurtled down Rushmore Hill towards Pratts Bottom, Chelsfield and Orpington. We received some further impatient advice from a motorist who thought the roads belonged to him. It does seem strange that the speed limit on many of these tiny lanes is 60 mph, and stranger that many motorists view 60 as a target not a limit.

We were tired as we toiled out of Orpington; Toys had taken its toll on our legs, here we said good-bye to Chi and Rob who split towards their nearby homes. Chi has a seven week old baby so he wasn’t expecting any peace and quiet when he got indoors. Our route flattened through Petts Wood and Jubilee Park. Andrew had promised to have us back in Bromley by 4.30 and we made it with time to spare. We had a closing snapshot outside Bromley South Station, kindly taken by a passer-by so we could all be in it, said our good-byes and departed homewards. 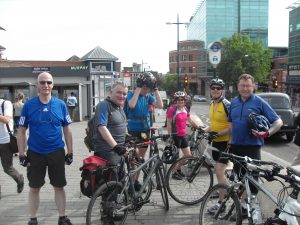 We will contact Jody, it was her return to cycling after a break so we need to get her brought into the fold on one of the less challenging rides.

Despite all my abuse: Andrew it was a wonderful day out; thanks to you and Trevor for leading us.