Bromley Cyclists were represented by five members at the meeting held at the Coin Street Neighbourhood Centre near Waterloo Station.

The meeting was divided into two parts: in the morning the AGM dealing with the annual reports and numerous resolutions for approval, and in the afternoon the campaigners conference comprising of various workshops designed to enhance our knowledge and skills to deal with the serious business of making things better for cycling and so encourage more people to cycle.

The resolutions were dealt with as follows:

Special Resolution One: Amendment to the Articles regarding the binding nature of policies set by the Board and by General Meetings – approved.

Special Resolution Two: Amendment to the AGM Standing Orders regarding the scrutiny of motions submitted to the AGM – approved.

Special Resolution Three: Amendment to the Articles regarding registered Groups of the London Cycling Campaign – approved.

Motion 4 Creating LCC’s vision for a cyclised city – not approved.

Emergency Resolution 2: To formally oppose the introduction of the Eurostar policy requiring bikes to be dismantled and boxed before they are carried onto their trains – approved.

The board election results were as follows:

Congratulations to those who have been elected. Bromley Cyclists wish you well with your duties! 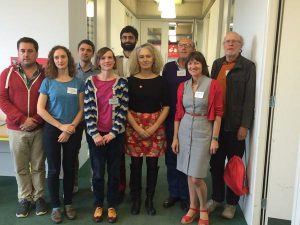 The winners of the various awards were also announced. I will post those details when I can get the list.

Afterwards many delegates retired to the nearby Mulberry Bush Pub for a well-earned debriefing.

A hearty thank you to all LCC staff and volunteers involved in making the meeting enjoyable and informative.