Bromley Cyclists are delighted to learn that local Liberal Democrats are making cycling one of their future priorities. 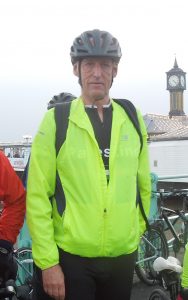 Bromley LibDems say they will fight for radical change in transport policy, in order to greatly reduce road congestion and air pollution, and to make town centres more attractive living and commercial spaces. In particular they will enable large numbers of commuters to cycle to and from the stations, and provide children with safe cycle-ways to school.

Lib Dems spokesman Jonathan Coulter said: “The case for cycling is simple: the more journeys we can make by bicycle, the less the congestion on the roads and the healthier we shall be.”

“But this is going to require large and long-term changes in the council’s priorities.”

Click here for further information and the LibDem survey.

Expenditure on cycling in Bromley is pitiful, he said, pointing to a local spend of just £1.89 per person per year compared to the £10 recommended in a parliamentary report. Just 1.1 per cent of local journeys are made by cycle.

Bromley cyclists call for all of the borough’s political parties to prioritise cycling by supporting the recently launched LCC Sign for Cycling mayoral campaign.

In particular we are demanding: