London to Brighton with the Veteran Cars

This is something of a misnomer; we didn’t actually start with the cars at Westminster Bridge, but joined them as they passed through Croydon.

This ride it has to be said was more a tribute to perseverance and endeavour than enjoyment and leisure. I arrived at Bromley South in a deluge at 7.15 am. I had already received a number of texts and emails from folk crying off because of the weather. And it was already clear that the weather was going to play a major factor in today’s proceedings. If no-one had turned up at Bromley I would not have been surprised. First to arrive was Gig, soon afterwards Rob rolled up: and that was it. We waited an extra few minutes just perchance some other soul should arrive; it was not to be, so we departed.

It could not have been half a mile before we were all waterlogged. Overshoes failed, gloves let water in, waterproof over-trousers betrayed their weaknesses. It wasn’t very much further before we had our first mechanical of the day when Robs left crank came loose; we pulled over and made the best repair we could, lacking the right tools we hoped we could do enough to get us to Croydon and find someone with a socket set. Almost immediately our makeshift repair failed and in the back streets of Hayes we sadly said goodbye to Rob, this was a real shame particularly as he was already wet through.

Gig and I pressed on; in Addiscombe we met a bunch of cyclist heading in the opposite direction having decided to quit, they confirmed they had met Linda and that she was up ahead making her way to the rendezvous. Then joy, a phone call from Rob. He had found someone with a tool-kit, made a repair and was on his way back to join us.

At East Croydon we also found Alan, a friend of Steve Watkin who had come to join us, but he didn’t like the look of the weather and bowed out before we set off. We waited in vain for any last minute stragglers; there were none. As we prepared to start off we were found by Dave to say that there were a dozen or so other cyclists at McDonalds in the High Street. We set off with Dave but the meet up was not to be. As we headed along the tram lane Linda cycled through some broken glass and so our first puncture of the day. We stopped in the shelter of the Whitgift and took a long time sorting the repair out. This however had the benefit of keeping us under cover during a particularly heavy downpour. Dave left us to chase down the peloton. 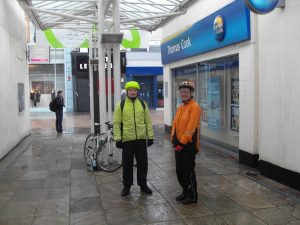 Once Linda’s tyre was fixed we set off and were soon amongst the old cars making their forlorn way through the weather. Drivers and passengers alike huddled in layers of warm clothing and waterproofs. It was 9.30; an hour later than I intended to start. The route was clearly marked at every junction, so I felt my lack of knowledge of the ride was not going to be too much of a handicap.

Somewhere south of Redhill we found our first tea stop being run by the local scouts; a welcome break. The rain had actually stopped but the skies were still very threatening. As we enjoyed our hot drinks and bacon rolls we were joined by Tom Crispin (Lewisham Cyclists) with Roy and Paulina, the residue from the McDonalds meeting who we had passed by unnoticed in South Croydon. We were pleased to team up with Tom so we were now seven. 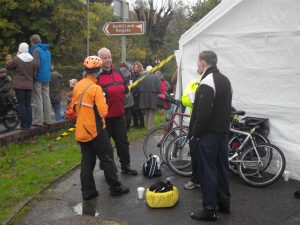 We were soon getting chilly standing around in our wet clothing so before long we were ready to get going again. There was a lot of lying water and in a couple of places we negotiated deep floods which covered the roads from side to side.

At Crawley with further rain falling we stopped for a pub lunch at the George Hotel. Having made ourselves rather comfortable we discovered that they didn’t actually sell food apart from carrot cake and almond slices. It was too much hassle to move on. Some had their own packed lunches the remainder dined on cake (Vive Marie Antoinette).

Emerging from the pub we found that the rain had stopped and ‘wonder’ there were patches of blue sky showing through, in addition the wind had blown up and the temperature dropped. It was 1 pm as we set off from Crawley with things looking considerably brighter. 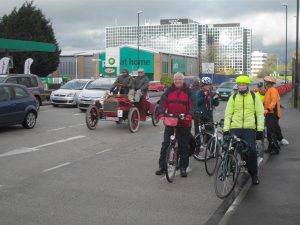 At Hassocks we suffered a further puncture. It was almost pleasant to loiter by the road side in the afternoon sunshine and make the repair, and repair it was, Robs spare tube was also found to be punctured. However this further setback and delay put us under real pressure to make it to Brighton before last light. 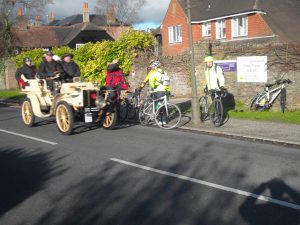 At the bottom of Clayton Hill is a secret path up a blind lane over a gate, through a farmyard (where the farmer’s wife tells you you’re on private land) across a bridge over the four lanes of A23 traffic. It was the path that I had always intended to use, but would never have found without the help of Tom. This enabled us to travel safely into Brighton avoiding the traffic.

As the sun set we arrived at Brighton Pier; cold tired and very pleased with ourselves. We had a celebratory tray of chips on the pier for which we were charged an exorbitant £2.50 (they were nice chips though) and the pier master decided he wanted to throw Tom’s bike into the sea because no bikes are allowed onto the pier and Tom wasn’t departing quickly enough. 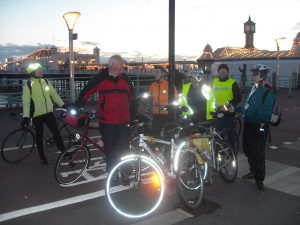 We separated at Brighton Station. Some going to London and then taking the train home some going back to East Croydon and then to cycle home.

It was a hard ride, much of it in atrocious conditions; all who finished can feel justifiably proud of their achievement.

Stats: my computer packed up, but it was probably 65 miles door to door; about 44 miles from Croydon to Brighton.