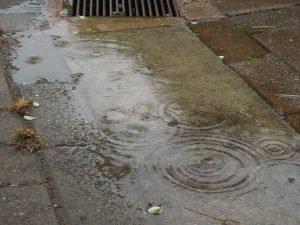 I don’t know what I expected today, but whatever it was I got whole lot more.

I set off early for today’s ride and there were the first spots of rain hanging on the air. By the time I emerged from the café where I had stopped for a coffee it was raining steadily. OK, Methinks turn up, hang around for 10 minutes, no show by any riders, then off home for that early bath. Hmm! How wrong can one be?

Spencer and Jack were awaiting my arrival with Simon (no Rowen today). As we are greeting each other along comes Brenda and her girls followed very shortly afterwards by Stewart who we haven’t seen for a long time. Then Neil and Alfie arrived and suddenly we were 10 and the ride was on – two rides in fact. And the rain just kept falling.

OK I’m thinking, so perhaps a quick trundle as a single group once round the park and then home. “Right” says Spencer, “we’ll split into two groups, Brenda comes with me on a family ride. John you can take the faster ride, perhaps to Ladywell.” “How about heading out of town” says Neil. We settled on a visit to the new tea shop at Layham’s Farm and off we went. We cut a fairly steady pace all the way up to the top of Fox Hill. Here we went down very gingerly all hanging on to our brakes in the wet slippery conditions. We were beginning to warm up a bit now, we paused for a breather after the really steep bit of Nash Lane, but not for long. On reaching Layham’s Farm the proprietor kindly allowed us to take are bikes inside and we were soon enjoying hot mugs of tea, coffee and chocolate and discussing some of the long rides we had all done. I think this must have closed down that part of the brain which has the homing gene in it because the next thing I hear myself agreeing to is to continue around the rest of the route of Bigfoot to Brighton Training Ride 1.

Crikey this is the longest LSotM Ride I’ve ever lead. Well if we are to have any chance of getting back in time for lunch we had better get a move on.

We relaunched the ride into the rain and were soon passing the White Bear on water-logged roads. There were a few other hardy riders out, but not many, and fewer still who could do more than grimace and mutter Hi through gritted teeth. The dip in Church Lane caught us all out as it always does. Neil kindly took the lead for a while at the Forestdale Estate, as I was a little unsure of the route, the rain had eased off now but the sky was still heavy with water yet to come. The roads on the Forestdale are named after birds, but to be honest if it had been me doing the naming I would have named them after mountains, it’s liked flippin’ slalem. Re-entering civilisation in Addington we picked up the cycle track alongside the mad mile and got back to Norman Park at about 12.45. Although Spencer’s car was still there he had long gone. In spite of everything, we all agreed that it had been a very worthwhile ride.

No photo’s today I’m afraid. It was just too wet.