Not quite as many as I expected today. The weather was fantastic and I hoped there would be a bigger crowd, especially as the forecast for the bank holiday Monday tomorrow is more rain, wind and cold. Yuk!!! 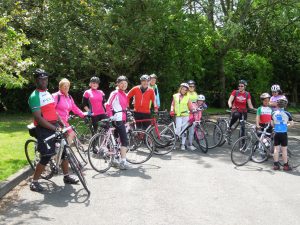 That said we still had a very good crowd of 15 and this month because there were no novices we amalgamated the Ride Easy and Ride Steady rides; a sort of Ride Steasy which seemed to work. We had a number of younger riders with us and they all did very well both in terms of cycling skills but also in their excellent good manners. Lovely children whose parents can be justifiably proud. 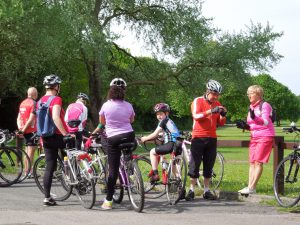 Getting Ready to Start

Spencer and Steve took the Ride Well group and headed out through Jubilee Park, Orpington, St Mary Cray and Crockenhill before returning through Pratts Bottom and up the A21. 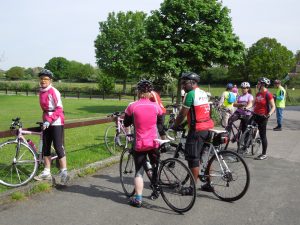 Although it was Eve who had set the route it was me who led the Ride Steasy to start with. We crossed the A21 with the usual amount of difficulty and then cycled up to and through Whitehall Recreation Ground. After some tiny alleys and footpaths we emerged onto Blackbrook Lane and then into Jubilee Park. 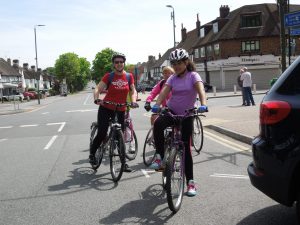 At Petts Wood we stopped at Cafe Maz and enjoyed a cup of tea or a soft drink according to taste. Suitably refreshed Eve took the lead and we headed back to Queensway and on to Petts Wood Recreation Ground where there was a football match just finishing. Here Eve led us onto the promised muddy bit through the woods which, as she had predicted, was very pretty in the dappled sunshine. 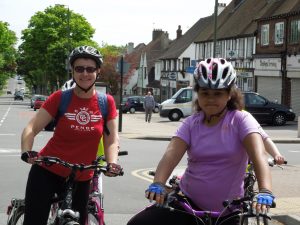 We were then led to Parkfield Recreation Ground and followed the perimeter of Bromley Golf Course through another Park which I believe is called Richmal Crompton Fields. This has clearly only recently been laid out and is very attractive; I didn’t even know it existed. It was here that the youngsters really showed off their bike handling skills – not by riding but by manoeuvring their bikes through the appalling double gates on the footpaths. There really is no excuse for such shabby infrastructure. 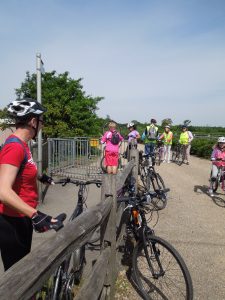 From here we decided we had enough time to extend the ride a little, this in spite of some rather tired legs amongst our younger participants who made not a murmur of complaint; top kids. 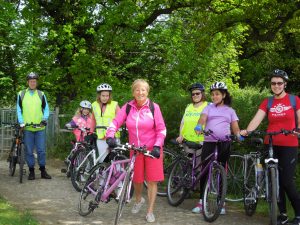 Along Magpie Hall Lane we turned back into Parkfield Recreation Ground which led us to Southborough Road. 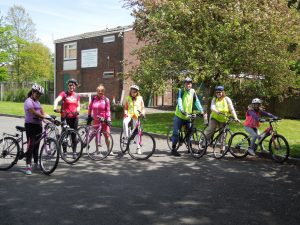 We finally returned to Whitehall Recreation Ground and to Norman Park. A round trip of just under 10 miles. A short time later Spence screeched back in with the Ride Well Team.

We had a quick debriefing and heard of each others adventurers before calling our good-byes and heading off to our respective Sunday Lunches.

Well done everybody, especially well done to our younger riders and in particular to Isobel who seemed very glad to reach Norman Park and very pleased when she learned that she had ridden 10 miles.