There was a superb gathering at the RV point at 10 am. it was a crisp, wonderful spring morning. The bright sun was rapidly warming the overnight chill; it was a day to be alive, a day made for cycling.

By ten oclock we had gathered 20+ riders; there was a buzz of anticipation; they were eager to get started.

As is our custom we divided into three groups:

Ride Easy – for the novice

Ride Steady – for the returning or slightly more confident cyclist

Ride Well – for the more experienced cyclist who is looking for a bit of a challenge.

Spencers ride was a little more adventurous than the usual Ride Easy as there were two mums with children who wanted to experience riding on the road. So after a couple of circuits around the park just to get everyone settled into the rhythm, the ride set off onto the backstreets of Hayes and Bromley South for some real road riding experience. The ride Leader found three parks he did not know existed and in total a distance of 8 miles was covered.

At the end of the ride in the Hayes entrance to Norman Park the children stopped for an ice cream and the adults a coffee at the new mobile coffee vendor. (a very welcome edition to park life)

Thanks Jack for acting as lantern rouge (if you don’t know what this is then google it).

Nine of the original 20+ were on this ride. The Scothern family did very well, particularly the youngest who we originally thought might be better suited to the Ride Easy group. This group did a large loop around Bromley following the quiet ways and stopping for a very pleasant coffee at Beckenham place Park. It was an unhurried ride giving an opportunity to natter whilst taking in the sights. I am pleased to report that Eve’s friend Graham who is ‘Bromley born and bred’ was on a journey down memory lane for much of the circuit, and there were bits he didn’t even know existed. Graham thought it was his first visit to Beckenham Place Park which looked particularly splendid today. 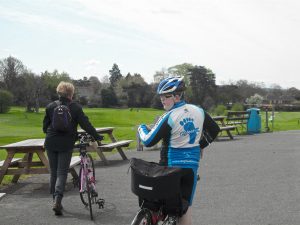 Before we set off I briefed the team that the ride was 7-8 miles (which I knew was being a bit economical with the truth) in the end it was over 10 miles so a special well done to Isobel, who impressed us all by completing the ride without a single complaint, and to James who rode his recumbent with skill and ability. We also learned that Emily was amongst the six girls at Bullers Wood School who has just successfully completed level lll bikeability with Steve Watkins and Helena Callow (both Bromley Cyclists’ members), out of over 200 entrants. 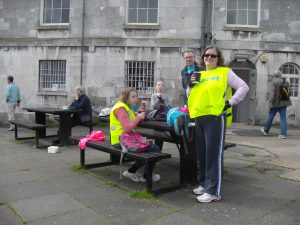 Well after running late and nearly giving Steve Bunn a heart attack as he thought he was going to have to lead the ‘Ride Well’ group I arrived 10 minutes late. No sooner had I caught my breath and after a short introduction we were off. The route was a circular 15 miles from Norman Park through Hayes to Keston Common and to Biggin Hill, then the lanes to Cudham and t Green Street Green eventually looping back to Norman Park.

We set off at a nice 12-14 mph. Its always difficult to plan the route when you are not sure who’s going to attend but everyone was keeping up (some working harder than others). We climbed up past BigginHillAirport and after a few stops to regroup reached the Spinning Wheel (Shampan2) where we met another group of cyclists coming the other way. It was here things got interesting; a queue of cars went past with a middle aged woman hurling abuse at all the cyclists as she went. As you can imagine, surrounded by 30 or so cyclists she was met with a response she wasn’t expecting!!!

We rode on down hill to Cudham, which everyone loved and decided to stop at the Cafe in HighElmsPark, everyone was enjoying the ride, and there had been a few compliments about the route which was nice. Unfortunately as we were entering High Elms, Stuart hit what can only be described as a crater, his pannier somehow jumped over the other side of his rack taking his mudguard with it. This took a bit of roadside repair which delayed us a short while. From High Elms we decided to split and make our own ways to our homes; a good ride with great company.