Eight of us gathered at Bromley South on a bright still Saturday morning, there were a few high clouds and perhaps the temperature was a degree or so lower that we have enjoyed of late, but it was really a perfect cycling day. Oh how we cyclists love the summer. Using the relatively new Super Saver arrangement we bought tickets and boarded the 8.53 to Otford. There were more riders already on the train; and at Otford we met the remainder bringing our total numbers to 19. At 9.30 Trevor, our ride leader led us out of Otford Station and up the vicious little lung stretching climb towards the Pilgrims Way. We were all pleased to be on the road and out of the shade around the station where it felt distinctly chilly! Most cyclists, struggling on their winter commutes, dream of days like today; it’s what keeps us turning the pedals over year in and year out. 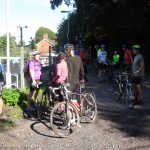 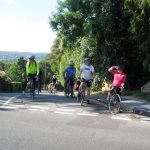 We followed the Pilgrims Way into Kemsing and then turned south across the road bridge over the roaring M26 into the quaintly named Noah’s Ark. Making our way further and further south along quiet country lanes there were any number of interesting places where we could have stopped to investigate and have a photo opportunity, we pressed on; the pull of the Winterdale Shaw cheese proving too irresistible, particularly because of the 1pm deadline at which hour the shop closes on a Saturday. 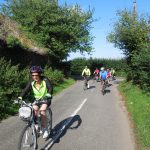 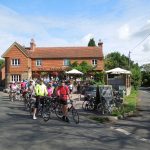 Before setting off we had all made a mental note not to overshoot the little turning at the top of the hill which may or may not be called Watery Lane, this is a turning that despite our best efforts, our electronic navigations systems, and our knowledge that it is an easy turning to miss we always seem to overshoot down a lovely long hill and then realising our mistake we have to ride back up again. So what did we do? You got it, we missed it again, and to add to our humiliation we met BigFoot Cyclists coming the other way. Fortunately we realised our error before we reached the bottom of the hill so we did not have to toil all the way back up. We caught up with the Bigfoot Riders who were having a coffee stop in the Plough at Ivyhatch. 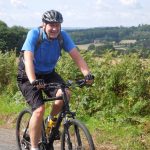 We passed on undulating roads of varying surface qualities through the pretty villages of Stone Street, Dunk’s Green (host to the Kentish Rifleman Public House), Plaxtol and Crouch. At the expansive green in the centre of Offham I managed to snap a quick picture before we were off again. The call of the cheese is a strong one! 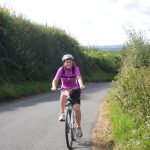 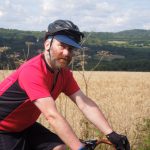 At Trottiscliffe (Kentish spelling – pronounced Trossley naturally) we began the climb which eventually becomes the infamous Vigo Hill. We dropped to our lowest gears and attacked. 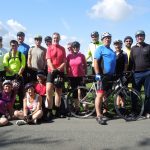 Now the gentle incline begins to steepen. Now is the time to hit the groove – head down, lowest gear, slow very steady pedalling, pick a careful line of advance and just keep going. Try to ignore the odd decomposing cyclist in the gutter, past fatality from some long forgotten sportive. Try not to think of the fire going on in your lungs and chest. If you are in the wrong gear – tough it’s too late now, there’s a choice – work or walk.

About ¾ of the way up you become aware of a bridge high above. Here Vigo is at her steepest and most vicious. You realise the lump in your throat is in fact your lungs, and the pain goes on. Some of us walked and may I say there is no disgrace in that. And then it’s over the gradient loosens, you begin to quicken pace 2.2 mph, up a cog – 3 mph. Finally you burst onto the top road. You look for the brass band, where is the local mayor with his bag of medals, surely there will be a letter from the palace recognising your incredible feat. Nope nothing. A rather grotty looking pub and that’s about it. 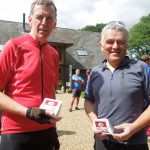 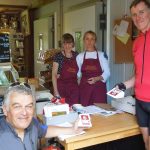 Having caught our breath and ensured everyone was still alive we set off for the final 1¾ mile downhill approach to the Winderdale Shaw Cheese Farm which was doing a roaring trade. There was also a van selling plants and some local produce. We continued our recovery under the shade of the trees outside the door of the shop; those who wished were able buy their cheesy rewards. The shop is also doing unpasteurised milk nowadays; a customer was patiently filling his glass screw-top bottles from a large metal urn. According to him when the milk goes off it just naturally turns into yoghurt, not sure I’d want to try that somehow! The sunshine was glorious. 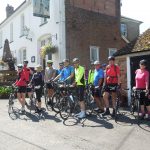 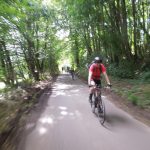 A couple of miles further on we reached to the Black Horse in Stansted for a well deserved lunch. We were welcomed, the pub doing a good trade; some settled in the garden overlooking the steep valley others remained indoors. Refreshing pints were supped, beer, lager, cider, tea, coffee and we were soon being served with delicious lunches.

We had about an hour here before we made our way to the forecourt ready for the restart; there were some stiff legs now! We said goodbye to Shirley who departed to catch an earlier train back to Bromley. Being high on the North Downs here the only way is down; and indeed there were several miles of lovely downhill cycling down what is known as the backslope of the North Downs Ridge.

Here we experienced our only mechanical of the day when going up a short steep hill a rider’s chain jumped the top cog and fouled in between the cassette and the spokes, eventually with help from Chi and myself we managed to extricate the tightly jammed chain and get going again. The route now took us northward skirting New Ash Green and passing through Hartley where we swung South West towards West Kingsdown. Here Trevor announced that according to his Garmin we were just 12½ miles from the Shortlands Tavern and as he had nothing better to do he would peel away and cycle to the pub. And what’s more he bet that he would be there first!

There is another long uphill stretch here as we skirted the nether side of the Brands Hatch motor racing circuit and crossed the M20 and the much less busy, but still very unpleasant, A20. And now my favourite part of the whole ride, Knatts Valley; miles of lovely downhill through the most delightful countryside. If you only enlarge one of my pictures then make sure it is the one of the Knatts Valley.

At the end of the valley we reached Farningham by the Darent River. At Eynsford children paddled and splashed in the river outside The Plough pub. The riverbank was packed with folk enjoying the sunshine. We didn’t loiter today but headed straight to the station to catch the 4.15 to Bromley South and the Shortlands Tavern where we found Trevor who had been waiting for over ½ an hour.

A fabulous ride of about 40 miles at an average of 10 mph. Thanks to Trevor and Andrew for a an impeccably organised and managed ride; a lovely day out.