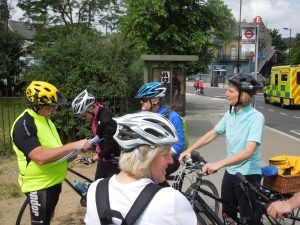 It has to be acknowledged that murder is a rather depressing theme for a bike ride (or indeed any other social activity) and so it would have been today but for Derek’s well researched and illuminating commentary and his choice of route which took us near or past many of London’s many icons. Nine riders gathered for today’s adventure. Unfortunately we lost two before we could start due to a minor mishap which resulted in a mechanical problem which needed a bit more than an on-street bodge it repair and so caused them to withdraw.

Our ride began at the roundabout at the end of Croxted Rd where we were told about the rather pleasant green meadow which is reputed to cover a plague pit. It looked very fertile! Croxted is an interesting name and is reputed to be a derivation of crooked. Of course when one looks at the map it is easy to see how College Road which adjoins at the round-about and which is definitely crooked might have originally been an extension of the Croxted Road and so given it the name. I also understand that this will be the southernmost point on the Southwark Spine; a cycleway which will link to the central London North – South cycleway.

Making our way through Dulwich Park we arrived in Lordship Lane and stopped for a quick photo opportunity outside a rather important DIY merchants. I shall not relate its significance here but if you look at the picture and do a little research I am sure you will discover why. 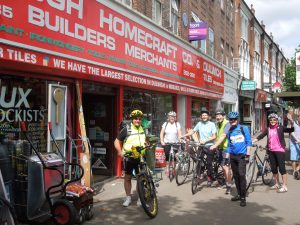 Next we visited Barry Road and learned about the activities of a couple of rather sad alcoholic pensioners, one of whom murdered the other. Barry Road derives its name from Sir Charles Barry, designer of Westminster Palace who was a prominent in the area in the 18th century.

In the back streets to the north of the vile New Cross gyratory there are some real hidden gems in the quiet backwaters, only the best informed know the rat-runs here, many of which don’t go far or indeed anywhere. So it is lovely cycling territory.

Along Cold Blow Lane underneath the rail lines we arrived at our next murder scene where two French students died in a horrendous attack.

We made our way through Rotherhithe and soon reached the River Thames. Derek pointed out a building on the Northern shore with a large letter E painted under the gables. This was executioners dock, Derek related grisly tales of pirate executions in forgone years. From here looking up river we had a wonderful view of the city. The odd shaped buildings which have sprung up in the last decade or so were clearly visible from our vantage point. The Walkie-Talkie, the Cheese-grater, the Shard, the Gherkin. To the east we could see, the now somewhat ordinary looking, Canary Wharf.

Following the river westward we reached the approach to Tower Bridge where we found a tribute to the recently murdered Tommy Blackmore. Here we crossed to the dark northern side of the river, the bridge was absolutely rammed with motor traffic, and on the pavements tourists excitedly took and posed for photographs using the bridge or Tower of London as the backdrop.

We took lunch at the Tower, sitting in the warm sunshine, we ate our sandwiches as we listened to Derek describing gory beheadings on the nearby immaculate Tower lawns.

After lunch we stayed on the northern shore of the Thames as far as London Bridge, where we were informed of the story of a body in a suitcase from the 17th century. From London Bridge we had an excellent view of iconic Tower Bridge.

The traffic chaos around the southern end of London Bridge defies description. How any normal human being can suggest that London’s clogged roads are anything but a major problem defies belief. We crawled through the junction surrounded by exhaust belching cars, lorries, buses, coaches, taxis all jostling for that tiny gap which might give a driver an advantage over his fellow road users – for a cyclist a pretty grim experience. We eventually broke free of the clutches of the queues and made our way further westward learning about Georgi Markov, Roberto Calvi, Polonium 218, Alexander Litvinenko, Frati Neri; as Derek treated us to more macabre tales from London’s past.

At Westminster Bridge we again turned northwards to negotiate Parliament Square and then make our way along the Mall to Hyde Park Corner and so to Tyburn at Marble Arch where we learned that between 40 and 60,000 souls lost their lives on the Triple Tree between 1196 and 1783. Tyburn was a village in Middlesex close to the present-day location of Marble Arch. It takes its name from the Tyburn Brook, a tributary of the River Westbourne.

Next we threaded our way through Paddington and eclectic, edgy Notting Hill to the site of what was 10 Rillington Place scene of the infamous Christie murders immortalised in the film of that name starring the young Dickie Attenborough. The new build residential estate has been constructed in such a manner as to ensure that it is almost impossible to pinpoint the exact spot where these murders occurred.

It was now mid-afternoon and so passing the scene of the Hyde Park bombing in 1982 we made our back towards South London via Knightsbridge and Eaton Square. Crossing Chelsea Bridge, Derek led us on a very quiet route through Battersea and then Clapham. We passed the back of Brixton Prison where modern day punishment is exacted in a much more humane manner and so to South Norwood where the ride had to sadly come to an end and we said our goodbyes and headed for our homes.