My eye-opening tour of Waltham Forest

Introduction
On Monday 26th March, I cycled from Bromley to Leyton to take part in a ride organised by Waltham Forest Cycling Campaign (WFCC). Others came from south of the river, notably Sutton and Croydon, highlighting our collective appetite to learn from Waltham Forest’s experience with its mini-Holland and associated investments. We were hosted by Paul Gasson and Dan Kelly, two volunteers from WFCC who had been closely involved in the project since its inception in 2013, and to whom I express my hearty thanks. I briefly describe what I saw and end with a discussion of what has driven these extraordinary investments and the lessons for other boroughs. 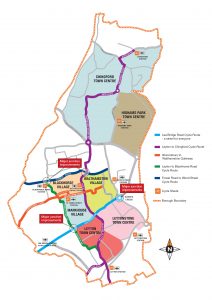 Brief outline of the investment
A total of £45 million has been budgeted, consisting of £27 million from TfL, to be spent on the mini-Holland, and £18 million of complementary funding from S106 and other sources. All TfL funds were originally to be spent by 2017, though Tfl has now agreed to a slower roll out. The main component activities are: 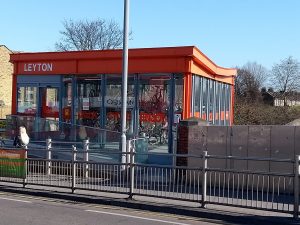 The tour
The residential areas are mainly late Victorian terraced streets without garages, and lower rates of car-ownership than in Bromley. We spent about 3 hours touring the borough but there was so much to see that I can hardly do it justice. Suffice it to say that the villagisation schemes were radical. Two shopping streets featured a reallocation of roadspace away from motor vehicles, with timed restrictions and one way flows, but with filtered permeability for two way cycling. Loading was generally restricted in these streets to mornings and late evenings, but there was provision of short-term parking spaces in the side streets. Plant beds, trees and seats for the public added to the ‘villagy’ feeling. 3

Much has been invested in closing rat runs. At Pretoria Avenue, in Blackhorse Village, we saw a primary school beside a previously very busy road with parking on both sides, which had been narrowed and turned into a quiet cul-de-sac. We saw another case where an old Victorian rail bridge had been sealed to motor traffic, much to the approval of Network Rail, which thereby avoided needing to reinforce the bridge to make it suitable for road traffic. Throughout the filtered permeability areas, speed cushions were being taken out and substituted by sinusoidal humps which are more effective at slowing motor vehicles but allow cycles to ride over in comfort at a similar speed to motor vehicles.

On the cycle tracks, we saw cycle-cum-pedestrian zebra crossings (“Tigers”) and special signal phasing for cyclists. Along the side of Markhouse Road, we found a pavement with both a cycle track and footpath, and Copenhagen crossings at junctions giving pedestrians and cyclists priority over traffic entering and coming out of side roads. Street furniture was located at these entrances to reinforce the message to motorists and bracket the junction so that they had to slow down to make the turn (as opposed to wide swept curves where they can corner at speed).

There are seven cycle hubs, and they are all electronically linked; we saw two at Walthamstow with capacity of 80 cycles each, and a similar one at Leyton tube station. All looked well used. There are 225 cycle hangers for 6 bikes each, located in residential areas, and we were told demand is very strong and exceeds demand. It costs £25 for a year’s storage at the hubs and £20 for the hangers. 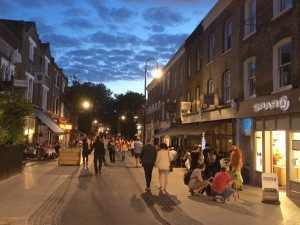 The impact in terms of cycling and walking?
The answer to this question is basically that it is “too early to tell”, given that investments have been made very recently and are still in gestation, pending completion of all components.

According to anecdotal accounts, there is already much to celebrate. In shopping parades, people are willing to stop and talk and let go of children’s hands. Muslim women are starting to ride bikes in some areas. And our hosts emphasised that the schemes were not an issue in the forthcoming local elections, which suggests a generally positive perception among residents. 4

Reaction of tradespeople in the parades of shops has been mixed, with some seeing the advantages, and others seeing the absence of through traffic and adjacent parking as a disadvantage. There is the possibility of gentrification, as landlords seek to cash in on improvements by charging higher rents.

Why has it happened?
While the borough had obtained financing for a ‘Mini-Holland’ network of cycle lanes, it had in practice sought to improve the environment for everyone, not just cyclists, anticipating the Mayor’s Transport Strategy and TfL’s Liveable Neighbourhoods programme. I was left thinking that Waltham Forest had inspired both.

What really bowled me over was the audacious spirit at work, a willingness to think radically and try new things, and on a large scale. It is a far cry from the reluctant approach I have seen in my own borough. But why had this happened in the borough of Waltham Forest?

The key spark seems to have been several Green GLA Assembly members who inspired the support of the Mayor’s (Boris Johnson) initiative to spend £100 million on mini-Hollands. Waltham Forest put forward one of three winning bids. WFCC has been a key participant since the project bid, and its actions are integrated with those of the Council.

What are the lessons for other boroughs?

Above all, seeing is believing. If we want our local decision-makers to commit to strong ‘active travel’ programmes, we should encourage them to visit Waltham Forest; WFCC will happily oblige in organising a tour.

Annex: some further reading and pics